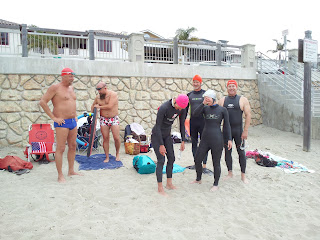 The swimming conditions today were just about as nice as it gets; with no wind or current the water was as flat as the ocean will get.  The water was clean and 55 degrees.  There were a number of people fishing from the pier and a smaller number of pelicans fishing around the bay.    Swimming today were Yvonne, Sylvia, Rob, Dave, Rob from Bakersfield, Kurtis, Amy and Dale.  I'm trying to figure out if my shoulder is hurt or just sore so I decided to sit this one out. Rob had brought along a swim support device to test drive.  It looks like a boogie board with a fin added to the bottom and a water noodle and flag on top.  The idea is that you tow it behind you with a waist belt and it functions as both a way to carry drinks or supplies and to help make you noticeable in the water.  Rob fastened his GoPro camera to the noodle to see how it worked as a media platform. 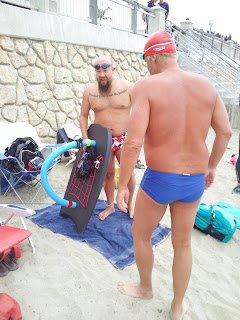 Sylvia and Yvonne started first and planned to swim the buoy line. The rest of the group did the triangle route clockwise.  Rob looked kind'a like a kid with a toy sail boat when he was getting in but he think that once some kinks get worked out it could be handy. 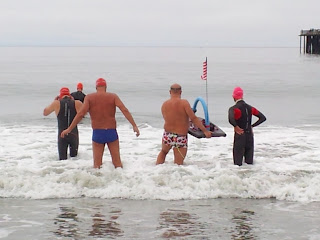 The sun came out half way through the swim and helped warm things up nicely.  The next swim will be Wednesday evening at 5:30.

That looks and sounds amazing. In Torquay, Australia the water is a similar temperature. I can't wait for summer and I can swim without my wetsuit.