A Wonderful Evening at The Beach

Niel, Ed, Ruta and Rob were joined this evening by Shawn.  Shawn and his family were vacationing locally and brought him by so he could swim in the ocean.  Shawn is from Santa Clarita, swims and does triathlons.  The water was 64 degrees (!), kind'a cloudy and there was a offshore type breeze coming from the ESE.  There were a lot of pelicans and other birds diving on bait fish on the east side of the pier so we decided to go in on the right side where there was no action.  Ed and Ruta stayed on the buoy line while Rob, Shawn and I continued on over to the Poly Pier.  Shawn was good about waiting for the more senior and slower swimmers in our group.  Once at the Poly Pier we doubled back along our route to our starting point, covering about a mile.

Last week we had a visit form the mythical (sorry Rob) superhero Aqua Thor.  This week we had three real superheros come by for a visit.  When we got out of the water Duke and Angela were waiting on the beach.  A week and a half ago Duke (a.k.a. Rufus) had suffered a heart attack while competing in the Golita tri.  After a week in the hospital he was released this past Monday and this was the first opportunity to see him.  He looks great and is doing well.  You can read all of the posts and see the photos at http://www.caringbridge.org/visit/dukeparmelly 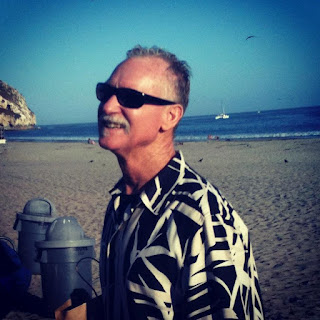 While I was walking back from the showers Dave VanMouwerik pulled up to the curb.  Dave had stopped by to say hi and to thank Rob and I for being in Palos Verdes on Monday at the finish of his successful Catalina Channel Crossing.  Dave did very well, finishing on schedule in in just over 12 hours.  He looked a lot better, less tired and greasy. 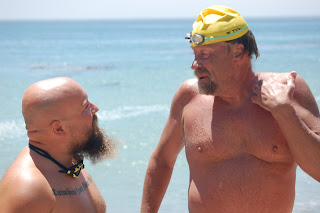 Thas is Dave on the right, briefly talking with Rob before getting back in to swim back out to the boat.  There are photos of and links to an article about Dave's swim at https://www.facebook.com/SwimAvila