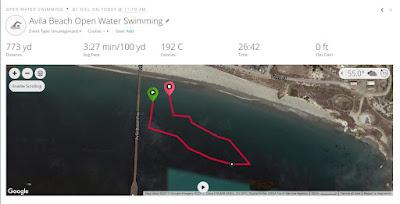 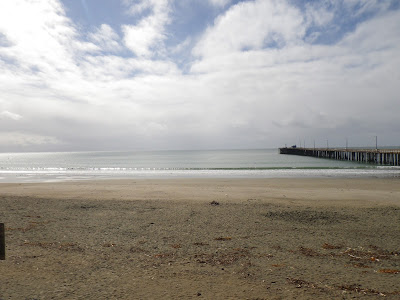 The creek was clean for the first time in weeks but it was raining in San Luis Obispo last night and into this morning, leaving some question about what the water quality would be today.. The sky was clearing when I arrived at Avila with patches of blue starting to appear. The water was flat with knee high waves and as the sky cleared the wind began to pick up.
Niel, Stephanie and Johnny took a (small) chance and got in.


I'd guess the water temperature was 52 or 53. By the time we got out and stopped along the pier the wind was kicking up and a chop was starting to build. Stephanie had not been in in some time so we chose a short course and would see how she felt.

Swimming east parallel to the beach I could feel a strong push and then had water breaking over my head from behind. It was fun surfing the building chop but I was already thinking about what the swim back was going to be like.

The swim back was a slog into the wind and chop. We stopped several times to group up and share tips on swimming in these conditions. I find it fun if I'm not swallowing too much water. Our swim was short but it felt like about the same effort as a flat mile so the distance was OK. Afterwards we had a cup of coffee on the beach before getting on with our Sunday afternoons.