It was cold today with thick gray overcast, a 55 degree air temperature and 57 degree water.
There was no wind and the water was flat, so except for the red tide the swimming conditions were great. ;-(  The water looked fairly clean but had a taste like licking a car tire, a rubbery/chemical smell/taste.  The lifeguard told us that yesterday the red tide was really bad so I guess we were lucky that it cleared up for us today.
Swimming today were Niel, Amy, Karen, Erc, Tom, Phil, Maria and John. 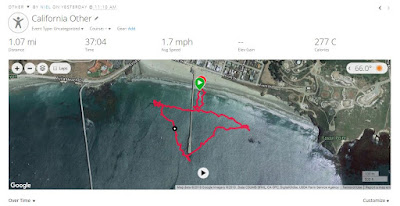 Thanks to Maria for sharing her plot of the swim after my
Garmin 310XT had a seizure and wouldn't download any data.

We swam a modified clockwise triangle which had a jog around an anchored sailboat. I had 1.72 km 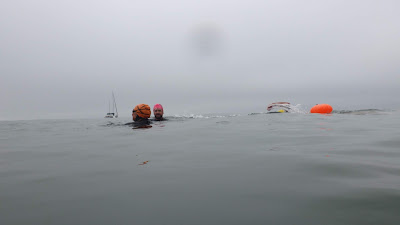 That is Karen, Phil and Eric leaving the first buoy and in the background
is the sailboat that we would swim past on the second leg. 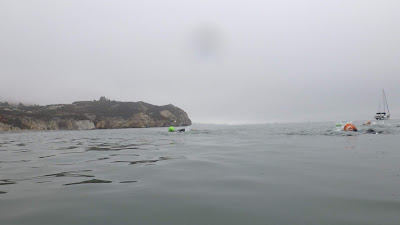 The group on the first leg heading down the buoy line 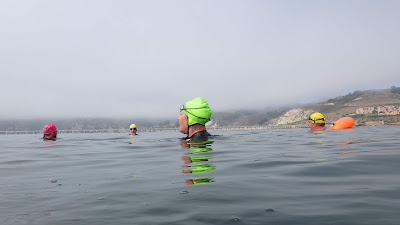 Phil, Tom, Maria and Eric at the end of the first leg.

The sun began to peek out while we were swimming. It came out enough to warm us up after the swim and then slid back behind the clouds.