1 + 1 = 0
That's how things started out for me today. I was going to bring both of my wetsuits and decide if it was nice enough to wear my tri suit. When I was 1/2 mile from turning off 101 at San Luis Bay Drive I realized that I had zero wetsuits in the car, so planning on bringing two wetsuits equaled zero. I returned home and got my tri suit and got to the beach in enough time.
Hillary and David were there so we'd have a nice group. The air temperature was 62° and thanks to a warm couple of days the water temperature was up to 61.5°. There was enough fog to make the end of the pier hazy so we decided to not go over to the Cal Poly Pier, which we couldn't see from Avila, and to do two big circles around the buoys and the end of the Avila Pier. We swam out and started clockwise. When we reached the fourth buoy near the creek on the west side a SE wind was starting to pick up and blow off the fog. When we reached #4 on the opposite end it had gotten sunny and really bumpy. On the second swim to the end of the Avila Pier it was tough to find a rhythm that would work with the combination of chop and swell. When we grouped up at the end of the pier Hillary spotted a mylar balloon being blown along the chop towards the beach. We decided to chase it down but it was moving as fast as the wind and we wouldn't have caught it if El Speedy David had not been with us. Feeling virtuous powered us back to the end of the pier.  The cross chop swim to the #4 buoy was not as difficult but more messy than swimming into the chop on the way to the pier.
I was definitly ready to sit down and have lunch when we got out. 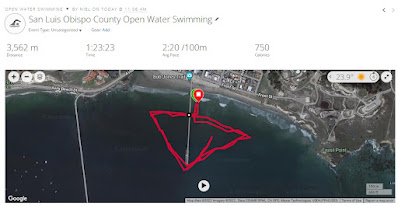 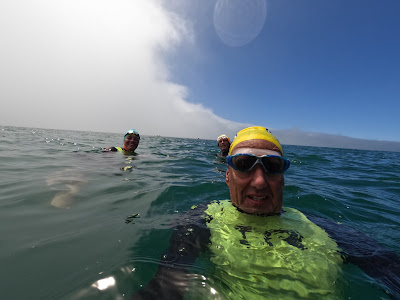 Hillary, David and Niel at #4 buoy on the east for the first time 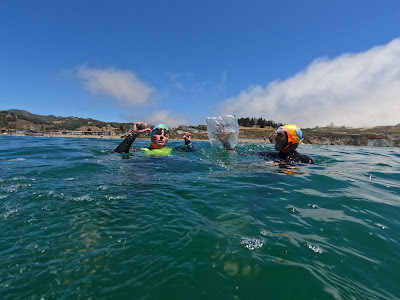 Plastic ocean trash collected.
I'll not be swimming on Tuesday but probably Thursday.  I'll know for sure about Thursday on Wednesday.
niel