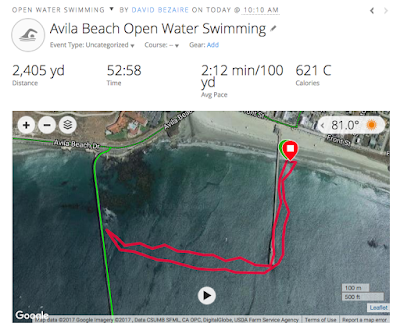 It was a sunny and warm 78F at Avila today.  The water was glassy and calm with thick patches of red tide near the pier and buoy line.  Beyond this area to the west appeared to be clear water so Duke suggested swimming to the end of Avila pier then to Cal Poly pier.

Swimming today were Duke, Sam, Sydney, Karen, Maria, Pete, Peter Kelley, Heidi, John and Jonny.  Jonny's friend Sean joined us on his kayak.  The Port was reporting 59F water but we all agreed that it felt more like 56F.

Our swims were variable from the start.  After several weeks of competitive swimming, Sam & Sydney chose a laid back swim near the pier and along the buoy line.  Peter Kelley did his own swim, sans wetsuit, as usual.  Karen, Heidi, John, Jonny & Duke swam to the end of the pier then to Poly pier.  John & Jonny were accompanied by a curious sea lion during this leg of the swim.

Maria & Pete got a late start and eventually caught up with us, but I’m not sure which route they took.

The water between Avila and Poly piers was calm, clear & beautiful - a very nice swim indeed.