The Landlord Drops By -

There was news of a dozen or so sharks of unknown species off of Pismo Beach but this is a normal spring occurrence and would not have kept us out of the water. However, Duke copied me on a text that he had received from Vince, who owns the kayak and paddleboard shop at Port San Luis, to let him, and us, know that beginning on Friday he had been seeing an 8' white shark feeding on sea otters around the Avila and Cal Poly Piers and over near his shop. The Avila and CAl Poly Piers are where we swim. Sunday morning the harbor patrol reported their own similar sighting. The lifeguards were advising people who entered the water to stay close to the shore so getting in the water was totally optional today.
I chose to stay on the beach while Sara, Ben, Jonny and Tom swam in the surfline on the east side of the pier.  I did a toe test and got a water temperature of 54ish degrees under gray skies with no wind, flat conditions and clean water, so it would swim like 52 and be very nice except for the pucker factor. Sara said that if you flipped a shark on its back it would pass out, so that was her plan. I she could do that to several hundred pounds of muscle and teeth I would have gone in and stuck real close to her. Nobody else mentioned a backup plan. 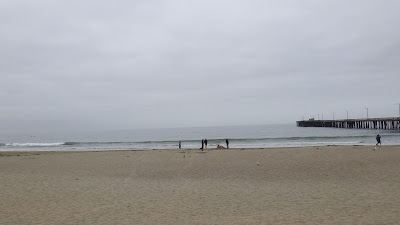 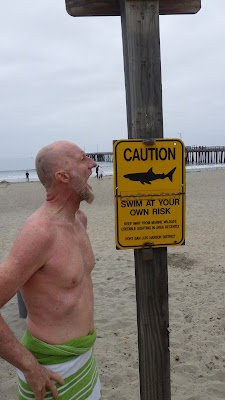 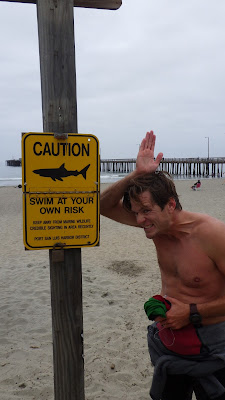 So a big thanks to Vince for thinking of us. We'll be back next week and hope that the the owner has moved on to another diner.

I'm looking for someone to swim with. I will be in Avila arriving Wed. 5/16 Afternoon leaving Fri. 5/18. Hoping to do a 2 mile swim. Are the sharks gone?
I swim in SF Bay with SERC. Kris