Tom’s Blog for Sunday July 14th (aka Group One report).

It was a beautiful day at Avila – there was a nice breeze passing
through just outside the Avila pier.  The circling sail boats between
the Cal Poly and Avila piers was taking full advantage.
This breeze caused a nice chop in the water to go along with the
occasion bumps from the small swell. There was some lingering
fog hovering over fossil point, otherwise blues skies.

Swimming today in Group One was NZ Jeff, Phil, Teresa & Tom.
Group Two, the Hampsey Trio (not to be mistaken for the
Hampsey 5), was Amy, Maria & John.  Ann Marie did her own thing.
The water temp was what it was – who am I to label the ocean
with a silly sapiens contrived measuring convention?
I’m not doing it.
Group One swam the “Southern Arrow” route – see June 9th
2019 post for map. It was about 1.5 miles despite Phil’s watch
telling him it was 2 miles.  Jeff was swimming particularly fast
today due to his adrenaline rush from NZ making it to the World Cup
Cricket grand finals (they ended up losing to England on some
kind of obscure ruling in the case of a draw!?).

Group One converged at one point with the Hampsey Trio –
1st Buoy, Westside. We had a few puffs from the peace pipe, and
continued on our separate routes. Group two swam a route
of their choice.

The latecomers were in the water second, again today.
John, Amy and I regrouped near the ladder on the way out to the end of the pier.  On impulse I decided to take the leap. Scaled the ladder was easy with the higher water. I was a little wobbly easing out onto the pier plank and knees a little shaky, I sent out an affirmation to your Father-in-law and to our Mum’s. Seemed like a fitting tribute. Jane, Amy’s Mom, has been gone one year, nearly to the day.

Group Two--Maria, Amy, and myself. Our swim was mystical and adventurous.
It involved Maria's magnificent and sublime jumping off the end of the pier, dedicated
to our mothers, and Niel's father-in-law, who have passed into another realm... and
Amy's hailing ahoy! to an anchored motor boat and turning down their offer for
a bloody mary... and me chatting with some paddle boarders who boarded an
anchored sailboat because they thought it was their friend's boat, until they discovered
it wasn't. But it didn't seem to matter to the men, who prepared to use the surfboards
stored upon the sailboat. The boat had no name.
Water--57 degrees. Distance--one mile.
We all felt gratitude for our swim, the vibes, and the gorgeous day.
--John Hampsey 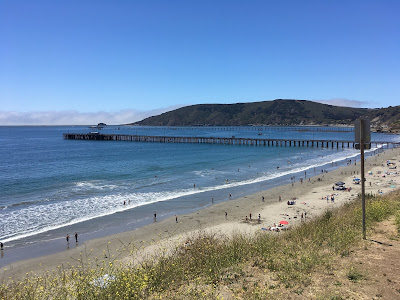 NOTE: Congrats to Teresa who was just back from her Santa
Barbara six miler – after being not sure she was going to swim
it at all, she ended up doing it, and came third in the women
category!  Well done to her.