Today's posts are by Tom and Heidi.

Beautiful day at Avila – sunny & clear, pleasantly warm, slight breeze – really nice.  As such, Avila would be packed by 1PM (well after our swim).  Cars looping the neighborhoods looking for the elusive parking space.  Nevertheless, it was a nice day.
Swimming in Group One was Leslie, Duke, Jeff, Heidi, and Tom.  The route started at our usual spot, #1 Bouy East.  From there we swam under the pier to #1 Bouy West, veered left and headed out the #3 Crossbeam of the CP Pier.  Then over the end of the Avila Pier and on to the #4 Bouy East and back to where we started.  I estimated this to be about 1.4 miles or so.  The water was the warmest it’s been this year – maybe hitting sixty.
Wildlife sightings: Two dolphins doing their thing just outside the Avila Pier, and three ring-necked phooies casually adrift, enjoying the day.
Instead of swimming with us today, Niel was having fun (?) doing the SLO Tri (is anyone really having fun doing a Tri?).

When the group turned around at Poly pier, I turned around as well, into some mild chop, with Duke’s company to the end of Avila pier, then in to shore.  While at the end of Avila pier, we ran into John, Stephanie and Jonny.  There was apparently some kind of wetsuit / zipper debacle when they were gearing up for the swim and Jonny somehow managed to pull on a wetsuit with zipper closed…?  Would love to have seen that!

This was Kiwi Jeff’s last swim with us this summer, as he is heading back home, soon.  We look forward to your return and next swim with us, Jeff! 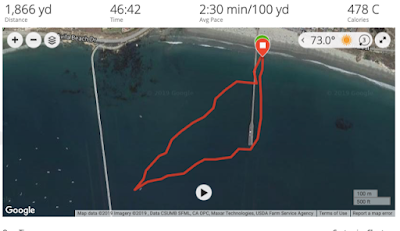 Marie and I did the SLO Tri today. This races was a pleasant morning workout for Marie and a slog for Niel. It was a beautiful day for the race. Your start time will determine what kind of an event your were participating in. The swim is in the city's pool so start times are spread out from 6:30AM to early afternoon. An early start time can get you cool and still conditions while by late morning it is often clear, warm to hot and with 15 to 20 MPH breeze paralleling the out and back bike route.  It was gray, cool and misty when I started at 7:30. I was wearing arm warmers and a shell vest on the ride and wiping the mist off of my glasses. Around 8:30 to 9 the fog burned off, it warmed up into the mid 80's and the wind came up. I was glad to be almost back in town at this point.
I'm looking forward to being back at Avila next Sunday.