Today's post is a mash up of blogs by Tom Lorish and John Hampsey and a plot of one of the routes from Duke.

There was thick marine layer covering Avila today.  Air and water temp must have been pretty close to the same, with the air maybe a bit warmer.  The water felt 56ish today, but it may have been a degree or two warmer as I tend to feel it a bit colder than it is.  Swimming was Geoff, our NZ friend (back for his annual holidays), Duke, and Tom.  That was the first group.  The second group was the Hampsey 5 (Heidi, Maria, Stephanie, Jonny, and John).

Duke, Geoff, and I swam out to the end of the Avila pier over to the third crossbeam of the Cal Poly pier and returned by route of choice.  The Hampsey 5 did a route of their choice.  I did happen to see the Hampsey 5 at one point: they were gathered on the port side of a sailing boat as I was returning from the Cal Poly pier.  It appeared, and this is sheer speculation, that the folks on the boat were throwing food scraps out to the swimmers.  As I say, that’s just what it looked like to me – maybe the water was colder than I thought!

Pete was there and did his own thing. It was good to see Geoff again, and am looking forward to swimming with him for the next few weeks. 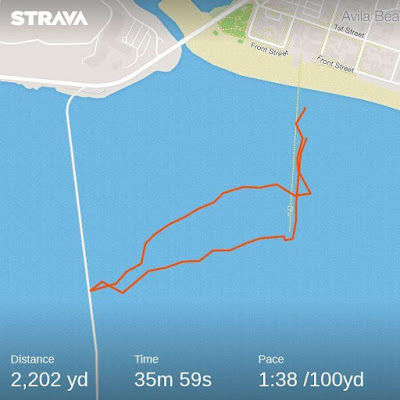 Sunday, July 7th, 2019
The day was cloudy and grey. Air temp 64. Water temp colder than last week, between 54 and 55 degrees. The Avila Dolphins went out in three groups. Group one--Duke and Tom and Kiwi Jeff-- swam to the end of Avila Pier, over to the Cal Poly Pier, and back to Avila Pier and to shore. Group three--Ann Marie and Pete--swam to the first and second buoys and then back to shore. Group two--Jonny, Heidi, Maria, Stephanie and I--entered at low tide, made our way thru some fairly large waves, and out to the end of Avila Pier. Half-way, we passed an unidentified dark mammalian object floating between the pilings. After re-grouping at the end of the pier, we decided to swim north to a sailboat anchored about ½ mile away, between the creek and the Cal Poly Pier. Upon arrival I asked for permission to board. When refused, I told them we were from the FDA. One of them was Dutch and one from Morro Bay. A third, a seafaring old gent at the stern, declared—“Prepare to repel the boarders. Throw out the chum.” After actually seeing the bloody chum in his hands, we departed with a ballyhoo and a wave, and made our way to the fourth buoy by the creek mouth. We performed a short mesmeric Buddha float, then returned back to Avila Pier, under it, and down the buoy line toward Fossil Point before returning to the beach. Distance – 1.2 miles. After showering and changing, group two shared coffee and home-grown peaches and plums. At 1:11pm, the grey clouds frittered away and a brilliant sun appeared. For the next hour, all seemed right in the world.