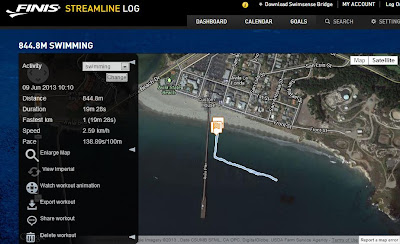 It was a different day today than yesterday;  the surf had gotten up early and the overcast lasted until past noon so yesterday was THE day for the Triple Martini Swims.  Today's water temperature was the same at 56.5.  The water was clear and critter free but there were a lot of fishermen on the pier.  Rob said that he did see a ball of bait fish during the swim yesterday so I guess that summer water conditions are arriving.  On the beach today were Niel, Duke, Byron (with his new hat!), Rob, Brad, Sylvia, Garry Gross and Yvonne.  Sharley ran to Avila from SLO and joined us.  Rick and Rhonda stopped by on their bikes.  Byron and Sylvia sat today out.  The rest of us were looking for something simple and or short.  Rob decided to stick with body surfing. The swimmers decided to do an easy half mile on the east side of the pier.  There were lots of fishing lines trailing off of the pier so we stayed farther away than usual.  The waves were large enough to give us a 3' surge to ride around on out at the buoy line.  Our swim was easy, uneventful and just what was needed. 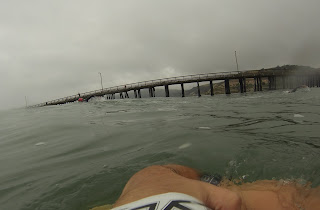 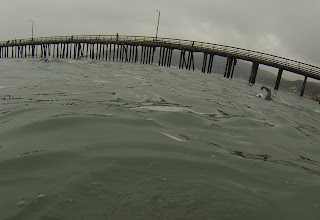 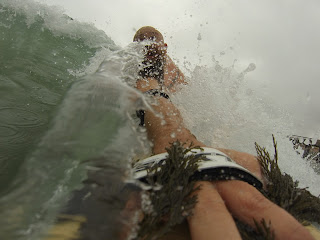 Bonus Triple Martini update! Casey did a write up of the swim from his perspective here: http://caseybatemantri.blogspot.com/2013/06/the-triple-martini.html