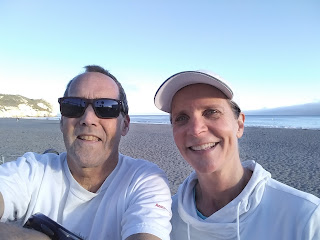 Heidi and I were the only swimmers tonight.

No water pix but here's a selfie after we finished and got dressed.

45 minutes from the stairs till we walked on to the sand. No GPS but, 4 buoys, around the pier and 4 buoys,
through pier, around the 1st buoy and in.

Forgot to add that for last third of the swim Heidi had a flippered friend as an escort.
The rather large seal kind of spiraled side to side under her, popping up to look at us a few times.
Its dark shadow under her was a bit freaky though.

Rather calm otherwise with a great ominous fog bank rolling in with the sun still shining.

You missed a good one.

Swimming today at 5:00 pm were Craig and Heidi.  It was sunny and 75 F and almost no breeze.
This was surprising, as it was very windy in SLO.  The port reported a water temperature of 58.5 F.
There was plenty of wildlife today; whale spouts and several dolphins in the distance and sea lions
playing near the pier.Conditions were smooth and glassy throughout our swim.  Craig braved the chilly water with only
trunks, goggles and rash guard - no cap!  We swam the usual clockwise triangle.  During the last leg,
a very large sea lion repeatedly swam under and next to Heidi and then escorted both swimmers all
the way to shore.Looking forward to this Sunday's swim.
Posted by Niel at 8:12 PM