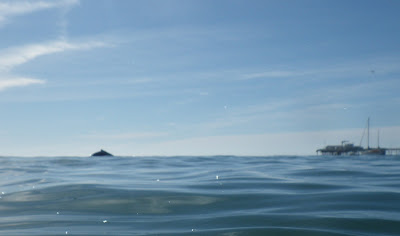 We had an unexpected encounter with a humpback whale while we were swimming today.
I managed to get this picture of the leviathan on the leg between the Cal Poly Pier and the end of the Avila Pier, where the squiggle in the route occurred. I had stopped swimming to pull some seagrass from my goggles and to get a better look at the large number of seals that were in front of me. The whale came up for a breath 10 yards in front of me and continued on his way west towards the Cal Poly Pier. The photo was from the second time that he breathed after our encounter. 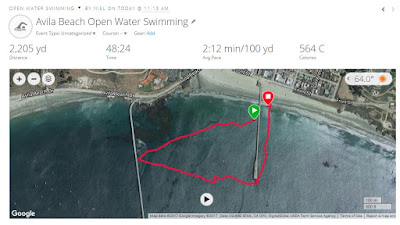 To begin, there was thin overcast, a weak sun and cool temperatures at Avila Beach. The air temperature was in the 50's and the water was 54.5 F / 12.5 C. The water was very clear and the surf small. Swimming were Niel, Heidi, Sue, Duke, Hillary, Jonny, John, Maria and Cherie who is friends with Dave Van Mouwerik, who was with us but not swimming. Peter Kelley also swam his usual solo route.
There were a large number of seals and dolphins south and east of the end of the Avila Pier so we decided to swim on the west side; down to the last byou at the creek mouth, over to the Cal Poly Pier, back to the end of the Avila Pier and in to the beach for a 1.25 mile swim. 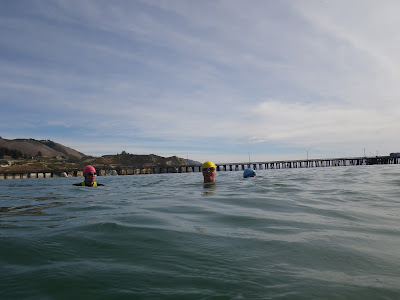 Heidi, Hillary and Maria at the creek mouth 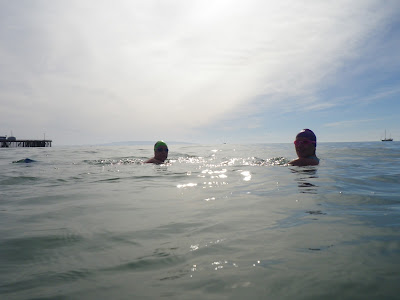 Cherie and Sue at the creek mouth. Since neither of them wear a
wetsuit and are strong swimmers they didn't wait for the rest of us
neoprenes and headed over to the pier on their own. 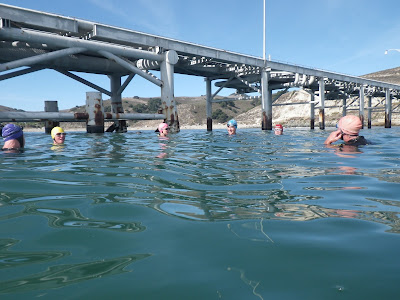 Duke, Hillary, Heidi, Maria, Jonny and John at the Cal Poly Pier.
Jonny, John and Heidi decided to head back the way we had come while
Niel, Duke, Hilary and Maria continued to the end of the Avila Pier. 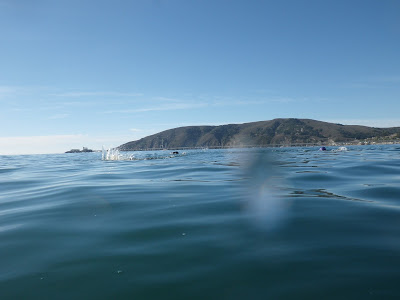 Maria, Duke and HIllary arriving at the Avila Pier. 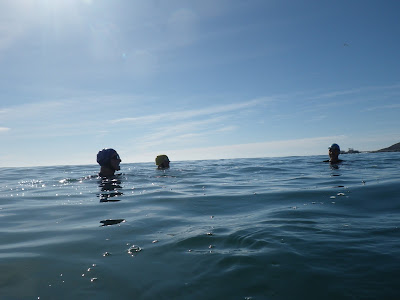 The same spot. Duke, Hillary and Heidi "did you see that bus that swam by?"

Dave was watching us from shore and saw the exceptional excitement we had.

Dave was with us in the summer of 2015 when we had a close encounter with another humpback at almost the same location: 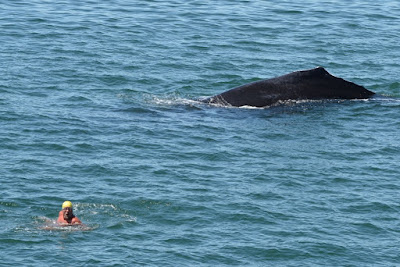 I had assumed that our 2015 experience was a once in a lifetime experience so I am at a loss to express how I feel about the second encounter.

We'll be swimming the Sunday after Thanksgiving.