While virtually all of the regular Dolphins were off doing the Morro Bay Tri Niel and Jim had themselves a for real open water swim on several accounts.
Conditions were sunny and warmish with small surf and 57 degree water. There was wind out of the SW that looked to be building. Karen had come to the beach but decided not to swim. 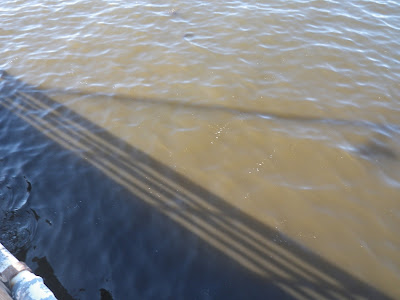 There were large areas of ugly brown/green water, either red tide or ? There were areas of nice clean blue water over near the creek mouth, the Cal Poly Pier and farther out, but the water near the beach looked yucky. There were also pelicans diving on bait fish, except instead of there being concentrated activity on a bait ball the birds were solo and dispersed, individually diving on fish from the surf line to the horizon. 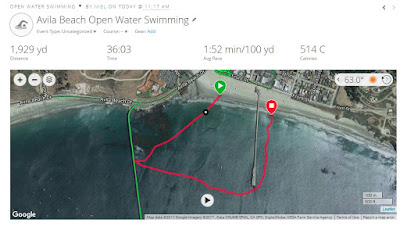 Jim and I decided to get in near the creek in the clean water, swim to the Cal Poly Pier and form a plan from there. As we got in the wind was picking up and we had ourselves a real slog directly into a building wind chop for the .4 mile to the pier. It was difficult to see where the brown water was so we headed for the end of the Avila Pier and hoped for the best. We never found even reasonable clean water and the chop coming over my right shoulder and head was tougher to deal with than taking it head on. 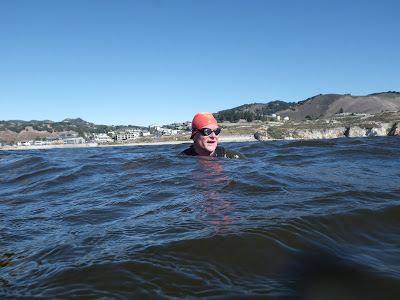 This is Jim at the end of the Avila Pier. The water here was the worst. We didn't see many options for a clean swim back so we went in along the east side of the pier. Even in the lee of the pier the chop was significant. As we got into the surf line the water cleared up to a nice blue for the last 150 M to the beach.

By the time we were done changing the outside looked totally like a washing machine and the whitecaps were inside the surf. Except for the brown water this was a great swim.