This week the Harbor Commission imposed additional conditions on the use of Avila, Olde Port and Fishermen's Beaches.  No loitering is allowed. Walking and swimming (!) thankfully are allowed. This means no towels, beach chairs, coolers or any kind of setup is allowed on the beach. So, we can still swim but not hang out together before or after swimming.

Earlier in the week Tom proposed that we swim a new route today. Tom wanted to get in at 10:30 instead of our traditional 11 o'clock. I was able to get there earlier and we managed to met in the wash. The route we would swim Tom called the PingPong Route; in the water on the left side of the Avila Pier and out to where the first buoy is in the summer, under the pier and to the third set of crossbars on the Cal Poly Pier, over to the end of the Avila Pier, back to the second set of crossbars on the Cal Poly Pier and over to the first buoy on the right side of the Avila Pier, under the pier and in. Tom had estimated this as a 1.7 mile route.  When I stood up in the shallows I had 3,140M on the clock.  A nice swim Tom!
I'd estimate the water temperature at 55 degrees, it was sunny when we got in with a SE breeze and a good chop and current pushing in from that direction. The water was nice and clean. I could see the reflection of the sunlight off of the bottom in 20 feet of water. 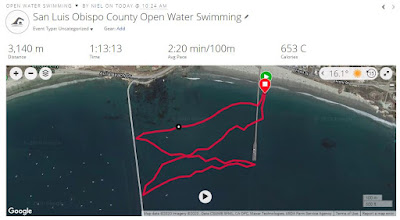 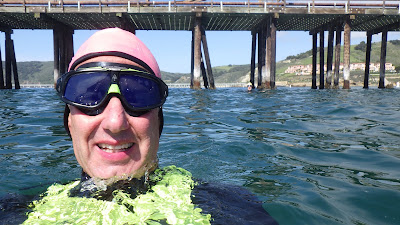 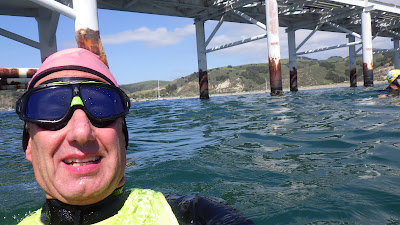 Me and part of Tom at the third set of cross bars along the Cal Poly Pier.
We had a current and a face slapping chop on our left shoulder on the way here. 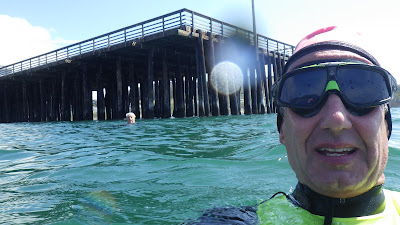 At the end of the Avila Pier.
Tom and I had connected up with David who is in the background.
The current and chop was on the right on this leg but coming at more of an angle towards my head. I thought the first leg was harder. Tom voted for this one. 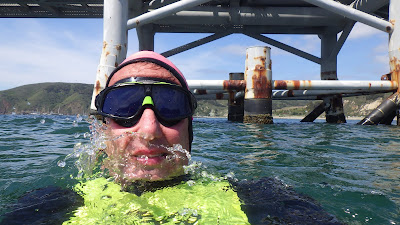 Me at the second set of cross bars along the Cal Poly Pier. Tom was getting cold and didn't wait for me catch up. David is out of the picture to the right.
The chop and current was coming from behind between my left hip and feet.
This was the easiest leg. 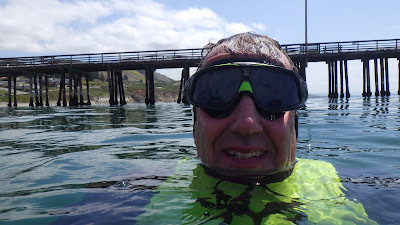 John, Jonny and Brian were also out there around the time we were.

We'll be swimming Tuesday and Thursday mornings, trying to get in between 9 and 10 before the wind comes up and back to 11 o'clock on next Sunday.

Thank you Jef Mallett for creating Frazz and drawing attention to the silliness of how we have fun.

The big pool has no lane lines or turns.