If you saw my post yesterday on the Central Coast Open Water Google Group you'll not know that my weather predicting skills will not make me a threat to John Lindsey.
Instead of 80+ degrees and very cold water Avila Beach had thin, high overcast, an air temperature of 70 degrees and a water temperature of 54 ish. There was no wind and the water was flat.
Tom got in early at 10:15 and swam the fortune cookie route which is about 2800M.
David saw him getting out as we were getting in, so he swam for 45 minutes.

Niel, Teresa and David were joined by Matt (I think that's his name) at the get in and we connected with Stephanie near the end of the Avila Pier. We saw Jonny on the beach. He was going to wait for a friend before getting in. 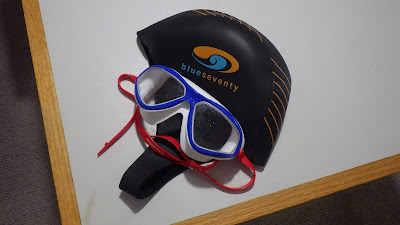 Matt, you left your cap and goggles at the showers. I'll bring them to the beach with me or you can post a comment to this post to let me know what you want me to do. 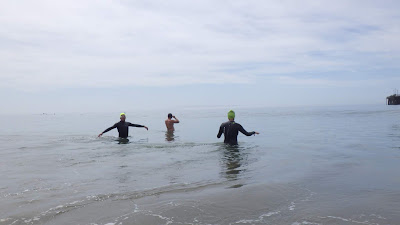 Teresa, Matt and David getting in. 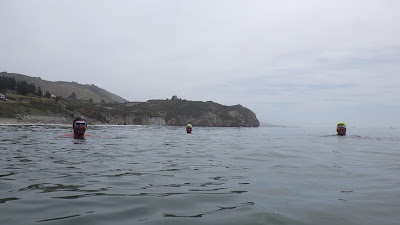 Matt, Teresa and David at the end of the buoy line. 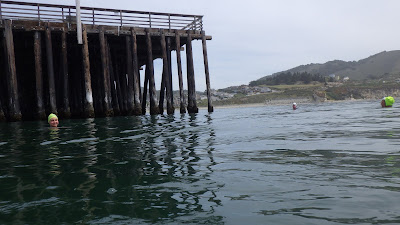 Teresa, Stephanie and David at the end of the Avila Pier. 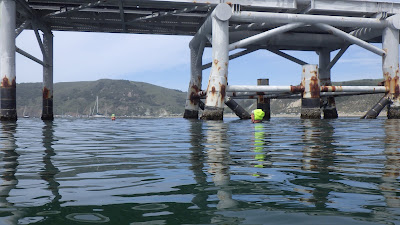 Teresa and David at the Cal Poly Pier 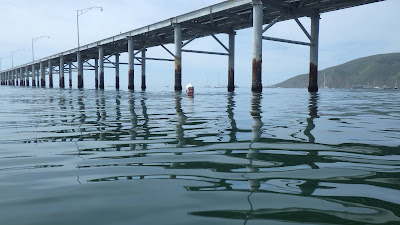 Stephanie at the same location.

The plot quick 3/4's of the way to the Cal Poly Pier
but came up with a time that was about right.

And this from John Hampsey:

Amy and I swam Avila around 3:45 Sunday afternoon... we left our bags by Blake's lifeguard stand and told him our swim route-- leg one out to end of the pier, and then prob over to fossil point and back in on buoy line. water was significantly warmer than last Thurs! we guessed 56 or 57, and clear, and beautiful... which earned us a deep conscious and unconscious Buddha float out by the reef buoy... Blake the lifeguard was very frustrated trying to keep the people from congregating in large groups on the beach without any social distancing, and it was a losing battle that we were disappointed to withness--so many clueless people ignoring the beach rule and ultimately jeopardizing the situation we have now-- still being able to swim. Indeed, because of so many uncool people flouting the rules, the beach and water access at Avila could be shut down entirely. we shall see....but our swim was glorious and filled with adventure... halfway to end of pier the we watched harbor patrol inflatable motor boat race like a rocket from Avila Beach over to Pismo Beach, in he aftermath we spotted the snouts of two seals bobbing in the water directly in our path from end of pier to fossil point. As you all know, seals are never a good sign, so we ditched our plan and swam under the pier and toward the creek mouth, but halfway there we spotted a bait ball in the making--hundreds of birds ready to spin an aviary whirling darvish, so we back-tracked under the pier and swam the buoy line nearly to the end, and then back to the beach .... swim length about .9 mile.experience-- exhilerationg with hints of vision, and best B Float in weeks ....we plan to swim avila again this thursday around 3, if beach is still open.peace and best wishes to all
--John Hampsey