The news hit the inter web Wednesday night that on the Thursday Governor Newsom would announce the closure of all beaches in California on Friday.  Sad new for swimmers but not entirely unexpected given what I had seen locally and on the news.

Tom proposed marking the occasion of our last swim by doing a 2 mile route. 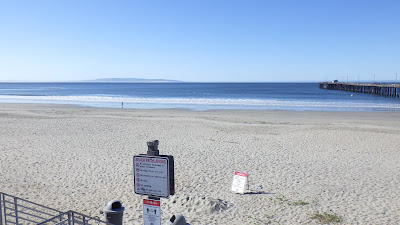 It was beautiful at Avila Thursday morning. We planned to get in at 9:30. There was a gusty offshore wind so the chop was worse the farther you were off of the beach. I'd guess the water temperature was 54 - 55; a bit chilly getting in but tolerable after the first 1/4 mile.

Tom's proposed route was a pretty complete tour of Avila Beach swimming spots and a lot more interesting than two laps of the buoy line. Out and over to the third crossmembers on the Cal Poly Pier, to the end of the Avila Pier, to the 4th (last) buoy at the creek mouth, down the length of the buoy line to the 4th buoy on east of the pier, back to the end of the Avila Pier a second time and in to the beach. I had 3432M or 2.13 miles when I stood up. 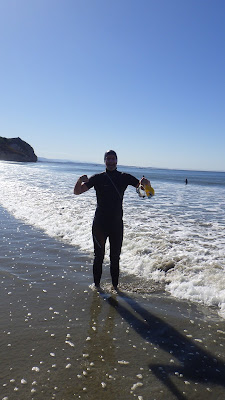 Tom getting a toe test 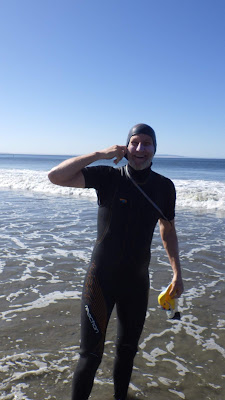 You saw what out there? 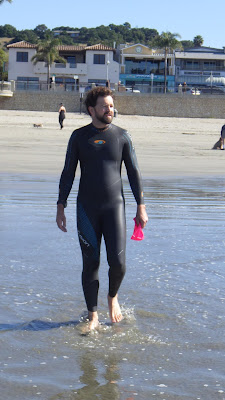 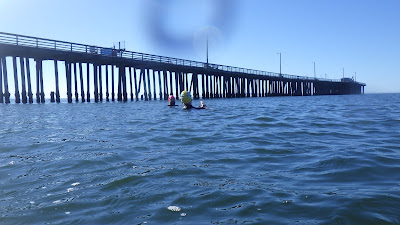 Phil and Tom at the first stop, the first buoy on the right of the Avila Pier. 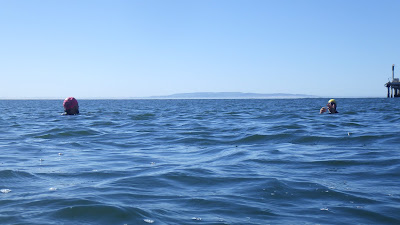 Second stop. Phil and Tom at the third set of crossbars on the Cal Poly Pier. 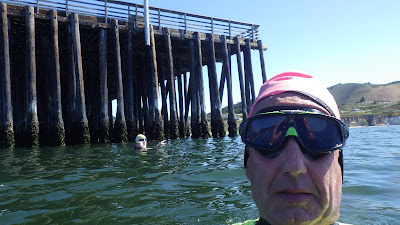 Third stop. Tom and Niel at the end of the Avila Pier.
Tom is on the phone and pointing at something.

From here we split up. Tom went off the front, I followed. He and I swam the same route. Phil did something similar, not sure just what.

BUT, as of Thursday afternoon the Governor has decided to close just the beaches in Orange County. I'm hoping we continue to use the beach and ocean wisely and safely and continue to be able to enjoy this wonderful resource.