David and I got in at 9 and Theresa and Brittany got in about 15 minutes behind us.  It was overcast and misty but the water was glassy and pretty flat. Though the waves were small I could feel the movement under me when I was beyond the end of the Avila Pier. The air temperature was 50 and the water 51 degrees. 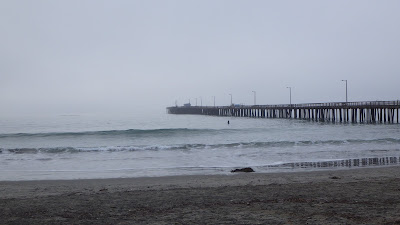 Avila Beach was looking rather wintery this morning. 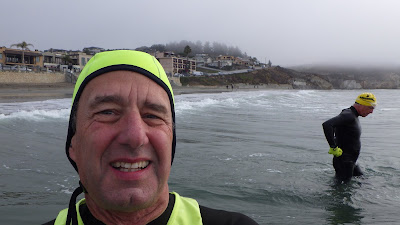 Niel and David getting in.
David was trying some neoprene webbed gloves to see if they kept his hands warmer.
He decided that they were a good idea. 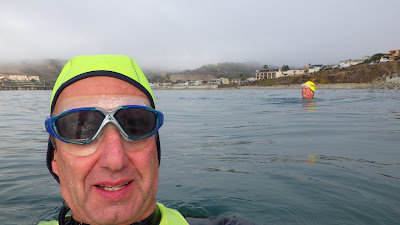 Niel and David at the end of he east buoy line.
The sun was starting to come out. 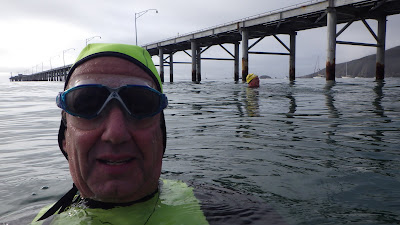 Niel and David at the second crossbars on the Cal Poly Pier.
The third set of crossbars are about 450M farther offshore.

Duke and I are going to swim Sunday morning at 7:30.

I received this follow up email from Leslie and verbally learned that her COVID test was negative, so she might have the flu or the test results were a false negative. She and her doctor have decided that she will isolate at home until after she is free of all symptoms before she returns to work.

You can, just to remind everyone to stay vigilant. I was just telling Kris Im losing my mind every time I see the Tribune article about how SLO shouldn't be considered like Los Angeles restrictions next to ads for holiday party catering needs and the christmas carnival festival at the Madonna Inn.  Its making me insane.  People who dont have to treat sick people have zero idea what health care people are going through right now.  My doctor looks exhausted.  And some people simply do not care.
Hang in there and hope to see you soon.  I appreciate the offer of help and right now Im fine.  I started to assume I would be in this situation one day soon and I have a freezer full of food.  I dont go anywhere and Im fine with that.  I am bored, so if you have any jokes or movie recommendations feel free to pass them along.  Ive gone through everything on Netflix
Posted by Niel at 3:48 PM