I'd missed swimming on Tuesday because of an appointment so I was looking forward to gettin in this morning. I had a ZOOM meeting that ran until 8:30 so I arrived at Avila just before 9. Theresa and Grace had gotten in earlier and I saw them over near the Cal Poly Pier when I was on the Avila Pier taking the water temperature. The got out just before I got in.

Today was like last weekend with the water at 51 degrees but the air temperature was up to a nice 55 instead of in the low 30's. That made a big difference in how comfortable it felt in the water. It was clear and sunny with a mild offshore breeze. There were 3 to 4 foot waves and a strong current and chop from the SW.

I swam out to the end of the Avila Pier because that distance is enough to get me acclimated to 50 something degree water. I started out to do a simple triangle route but decided to skip going under the pier in today's swell and instead swam back along the pier and down the other side for an additional 4 or 500 M. The chop and strong current gave each leg different conditions. 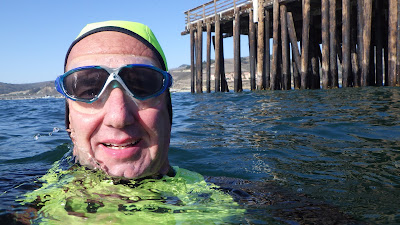 At the end of the Avila Pier
I'll swim at 8 on Saturday. Grace and Theresa may join me.
Sunday's swim will also be at 8.
John Lindsey posted this this morning about the surf conditions into early next week:
11-feet (with a 16- to 18-second period) by Wednesday.
Avila beach faces south which is 115 degrees away from the direction of these swells, but, long period swells like these carry a lot of power and are capable of wrapping around the breakwater at the port and producing large surf at Avila Beach. The surfers will be at the west facing beaches. We'll see what it is like for swimming in Avila on Monday and Tuesday.
niel
Posted by Niel at 1:41 PM