Niel and Duke got in at just after 7:30. Grace was a few minutes behind us but easily caught up at the end of the 'buoy' line. Avila Beach was very gray with something between fog and low clouds. The air was 48 degrees and the ocean is still stuck at 51 degrees. The surf was 1 to 2 foot but there was some motion in the water wherever we were. 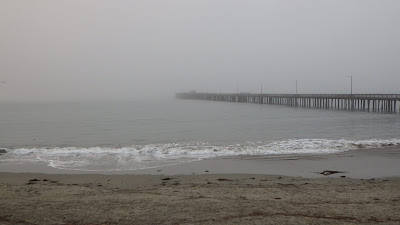 Duke had a 9 AM call with his daughter so we planned to swim
a bit shorter but harder to get him out in time.

The route was the east half of the buoy line, to the end of the Avila Pier,
to the third crossbars on the CP Pier, along the pier to the second crossbars and back to the start. 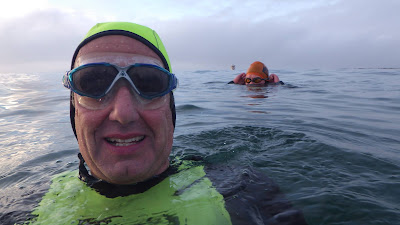 Niel and Duke at the end of the buoy line with the only buoy that stays
over the winter to mark a small reef over Duke's right shoulder. 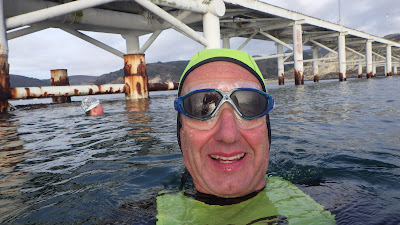 Grace and Niel at the third crossbars.
The clouds had lifted, the sun was out and it was a beautiful morning.
Duke and I got out while Grace swam for an additional 15 or 20 minutes.
I'll swim on Tuesday morning at 8.
niel