I saw a lot of swimmers this morning. Leslie was gettin out as I was walking to the pier to get the water temperature. She said that the conditions were nice and the water temp felt comfortable.  Tom was on his way out along the Avila Pier. I thought that I might see him near the Cal Poly Pier but our paths didn't cross. Tom had brought chocolate cookies to share today. Thank You Tom!

I spoke to Jodi and Stephanie from the pier and got this picture of them heading in after finishing a 'getting the kinks out before tomorrow's swim' swim. Jodi sounds totally stoked and ready. Her toes go in the water at 7:30 tomorrow morning and come out 10K later between 10:30 and 11.
Come on down support her swim! 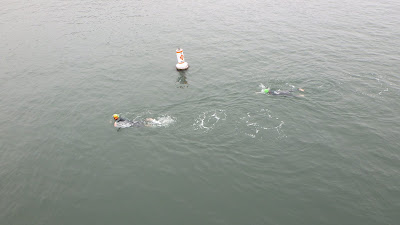 Today's conditions were great for a long swim. Avila was overcast with no wind. The air temperature was 62° and the water 60° and clear. There was no sign of the horrible red tide that has been punishing Pismo Beach recently. There was a swell out of the SW that had not built up to much yet. The largest waves were 4 footers. 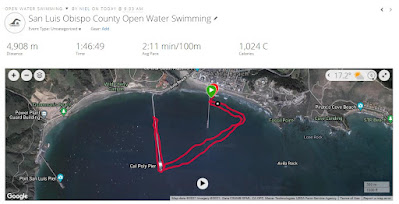 I wanted to do a longer, slower and relaxing swim so I did the buoy line and CP Pier route that works out to about 5K. 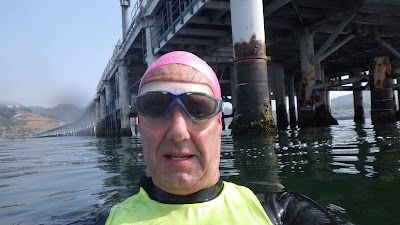 My first time at the end of the Cal Poly Pier.
At this point the overcast was burning off so the rest of my swim was in the sun.
Most of us are supporting Jodi's swim tomorrow so I do not expect many swimmers at 11.
Duke, you owe Jodi $25.
niel
Posted by Niel at 1:13 PM