Chased Out By The Crud

It was a fine morning for a swim at Avila Beach except that the red tide was everywhere. The air temperature was 61°, the water was 62.5° and it was flat with just a bit of wind chop.  Looking down from the pier the water looked red brown. I don't think that it shows in this photo but everywhere that there is a ripple on the water I could see red. Duke and I looked for a minute and decided to not get in. Tom did swim at 9 and said that it 'wasn't as bad as last week'.

There was also a 10,000 gallon sewage release into San Luis Creek late Monday and no testing had been done since then at the creek mouth or the beach. 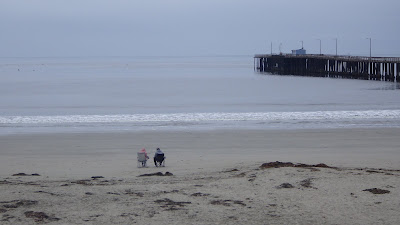 I'll be back Thursday morning at 9 to see how the water looks and decide about getting in.
niel
Posted by Niel at 6:46 AM