Avoiding the Yuch, A.K.A. Red Tide 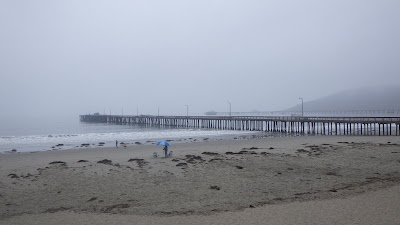 Avila was drippy and spitty this morning. Niel, Jodi, Stephanie and Leslie were going to swim at 8 and wanted to pick a route that would avoid the red tide that was so thick earlier in the week. With the overcast making everything look so flat and colorless it was hard to tell from shore what the water was like. The waves did look a little dirty so we decided to swim out to the buoy line and if the water was tolerable, turn left and head to the end of the buoys. The water was kind'a dirty but not nearly as bad as Wednesday and Thursday. The water tasted wrong, alternately too salty of just funny to me, but without good sunlight it is hard to tell how thick the blooming dinoflagellates were. (Blooming is used here as a homonym ;-)). At the last buoy we decided to swim to the last buoy on the other side of the pier and this turned out to be the right call. The water was much cleaner on the west side of the Avila Pier. We grouped up at the mouth of the creek and were joined by two women from the Half Moon Bay who were swimming bareback and having a nice time. They headed east along the buoys and we went to the second crossbars on the C.P. Pier, then to the end of the Avila Pier, back to the mouth of the creek and back along the buoys and in at the pier. A 4'+ set came in just as we were swimming into the break to add some fun to the finish. 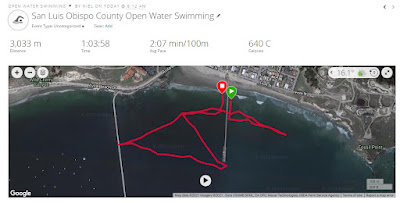 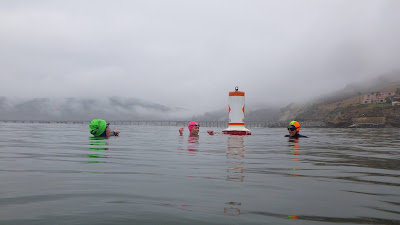 Stephanie, Leslie and Jodi at the buoy at the mouth of San Luis Creek.
Duke and I will swim Sunday at 11. Anyong who would like to swim in the sun is welcome to join us.
Thanks to Leslie for the yummy brownies!
niel