The Best Summer Day in November

We had a great group and perfect conditions today. It was clear and still with an air temp of 66° at 10:30 and 75° at 1PM. The water was 56° and glassy. Swimming were Jackie, who swims at paul Nelson aht this would be her first ocean swim, Niel, Duke, Leslie, Theresa, Ted from Santa Barbara, Jason from Paul Nelson and Roshana back for a second swim before returning to the bay area.
Tom and Sue swam earlier, going out and around Avila Rock for the second time this weekend. 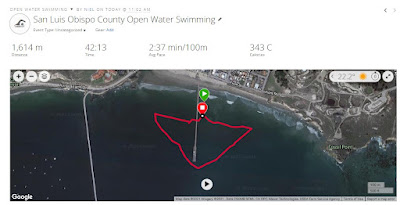 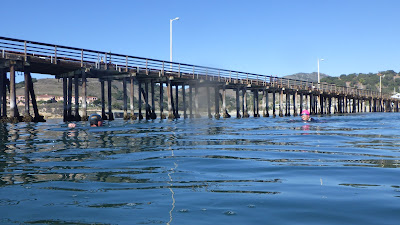 Ted and Jackie making it out to the first buoy. 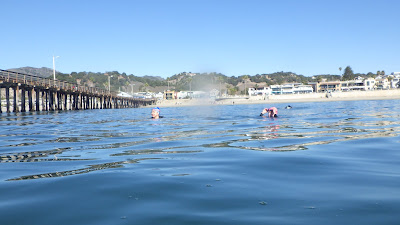 Theresa, Leslie and Duke at the first buoy 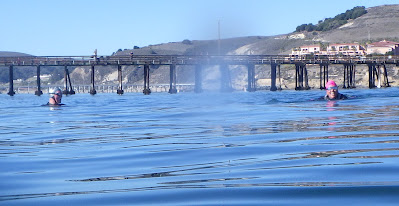 Duke and Jackie.
She was really having fun and was deservedly proud of having reached the second buoy.
She went in and will be back Saturday morning. 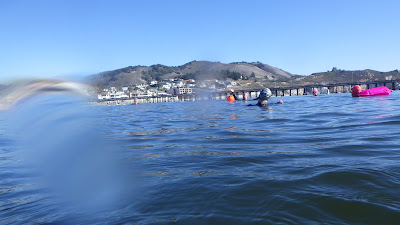 Theresa, Roshana, Duke's head, Leslie and Jason at the fourth buoy on the west side.
Afterwards it was so nice and comfortable on the beach Duke and I both took naps.
Duke and I will be back at 8 on Tuesday, at 8:45 (or as soon as I can get there after my 7AM meeting) on Thursday, 8 on Saturday and 11 on Sunday.
My friend Cynthia brought this article to my attention. It is about a man and his family who never liked swimming until they move to Australia and discover ocean swimming.
https://nyti.ms/3FN67QI
niel