There was no hole in the clouds over Avila this morning. It was a solid ceiling of grey with of visibility of 3/4 mile. At 9 AM the air temperature was 55° and the water 57°. The water was nice and clean and the surf was 2 to 3 foot. There were several different swells so the surface was a bit lumpy and pushy. There was no sign of Duke or his car. I saw Tom wading in ahead of me as I was getting changed. I saw Hillary coming in through the surf after I had gotten out so we went to the showers together. I think that she said that she had seen Tom over at the Cal Poly Pier. 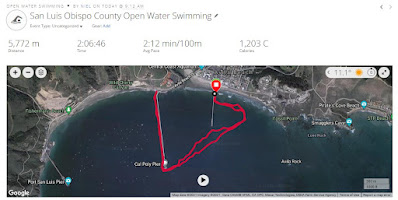 I had an urge for some distance and was hoping to do a first full lap of the Cal Poly Pier. I'd looked at swimming all of the way to the base of the pier several times but there had always been people fishing from the rocks. Today the conditions were good and there was no one there so I swam in and made my touch on the rocks before returning to the end of the pier. 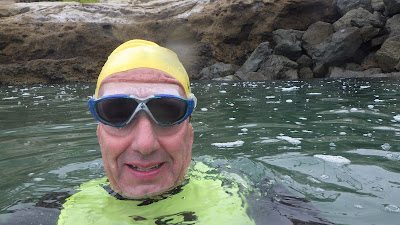 I seem to remember that there was a narrow beach at the base of these rocks but I could see no bottom this morning so I could swim right up to the rocks and hang there in the swell.
There is almost no kelp on this side of the pier compared to the other side which is pretty solid with weed, so with a mild swell access is easy. 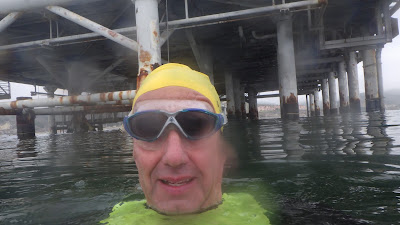 Back at the end of the CP Pier. 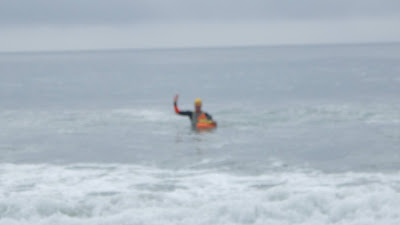 A blurry shot of Hillary getting out with her Avila Dolphins party boat which includes her GoPro camera, the Tube Ducky water thermometer and both a shark and wahine hula dancers.
I'm going to be MIA again this weekend but I'll be back on Tuesday at 8AM.
niel
Posted by Niel at 6:52 PM