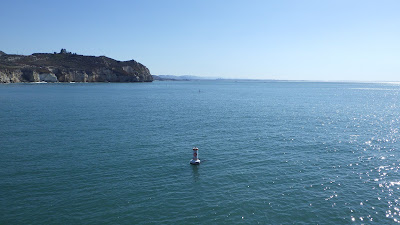 Sunday morning at 10:30 was bright and sunny, 67° with a steady offshore wind. The water was nice and clean and 57°. There was a 6.4' high tide at 10:44, so high that the buoy on the reef was under water, the beach was small and the swim out to the buoy line was extra long. The lifeguard towers have been pulled up to their winter locations and the swim buoys may be pulled out at any time. 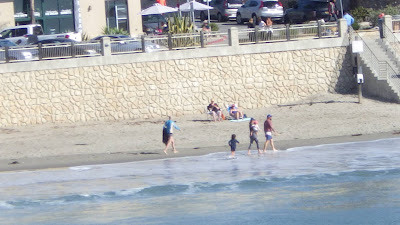 I got a photo of Tom walking back to his car after his swim.
He must have gotten in at about 9:30. 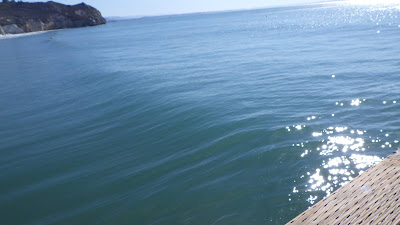 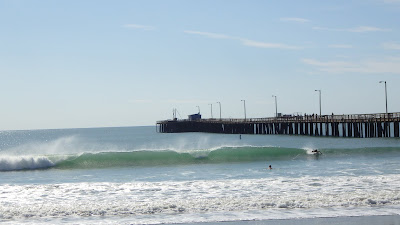 making some of the most rideable waves you'll see at Avila Beach. 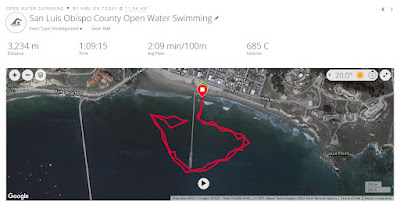 Maria and Heidi had swum before and were warming back up when I got there. Leslie, Niel and David would swim the triangles. Leslie had forgotten her wetsuit so she went bareback.
Tough girl! She did 1,700M and went in at the turnaround point. David and I doubled back on our route for a two mile swim. We both thought that it felt colder than the measured temp.
Unfortunately I had left the belt that I wear to hang my camera on at home and couldn't bring the camera along in the water so I couldn't get a photo of Leslie out there gloriously with no wetsuit.
I'll swim Tuesday morning at 8.