Avila was grey, cool and cloudy but there was no fog so visibility was unimpeded. The air temperature was 51° and the water was 57°. The surf was 2 foot with an occasional 3 footer.

We were getting in a hour before the high King Tide this morning.  The extra high tides had pulled a lot of water out of the SLO Creek Estuary, where the water is really polluted with bird and fish poop, so the water between the Cal Poly and Avila Piers was yucky brown and stinky. 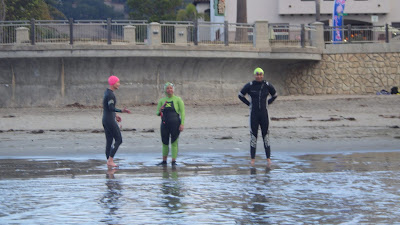 Swimming today were Niel, Leslie, Jacky and her son Elijah.
Jacky joined us for the first time last Sunday and is swimming short but having a lot of fun. Jacky talked Elijah into joining her today. He swam in college but has been inactive for a while and had never been in the ocean, but he was game to try. 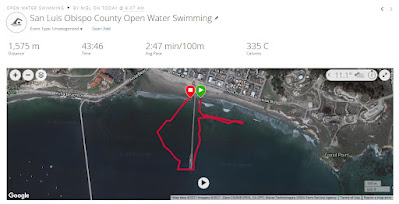 Leslie and I hung with Jacky and Elijah and swam back and forth parallel to the beach until they were ready to get out. The we went to the end of the Avila Pier and started for the Cal Poly Pier but the water quality made us turn towards where the last buoy is. That was still bad so we bailed and headed for the beach. If we had known we would have stayed on the east side of the Avila Pier. 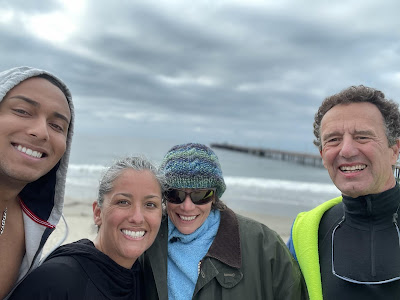 Elijah, Jacky, Leslie and Niel
We saw Tom out here doing what we had done, heading for the CP Pier, bailing and turning towards the beach and then reversing course and coming back to the east side of the pier.
Duke and I will swim at 11 tomorrow and probably stay on the east side of the Avila Pier.
niel