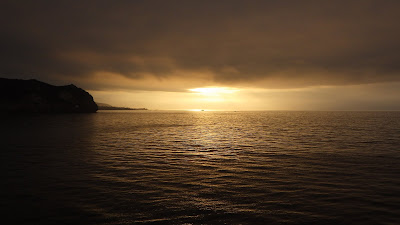 Hey, it is 7:30 AM and the sunrise over Avila Beach is almost the color of the water!
Yes, the red tide is still parked in Avila. Today the place to swim was the area between the Avila and Cal Poly Piers. Unfortunately, you need to swim everywhere to figure out where the cleanest spot is.
My Blue Water Task Force crew reported that Pismo and Shell Beach had some red tide but nothing like we are having in Avila. The beaches that are more open to the ocean seem to be better flushed. I'm hoping that Thursday's storm will stir up San Luis Bay and move this crud outta here.
The air was 51° and the water 57° with small surf, no wind and nice swimming conditions except for the color and taste of the water. Duke and I decided to do my two triangles route and were prepared to change routes or to bail if the water conditions got too yucky. With no sunshine it was really hard to tell from shore if the water was clean or not. 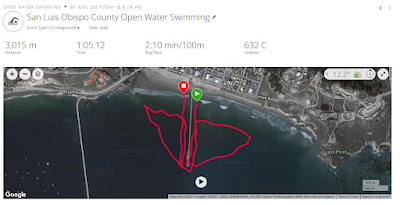 We swam out along the Avila Pier and met up at the end, agreed that the water was not good but not bad enough to make us cancel, so we swam the triangle on the east side of the pier.
The water was nice and clean for just the east half of the swim along the beach. The rest of the time it was not good. The triangle on the west side was much cleaner with only the water near the pier being dirty but even then cleaner than the east side. 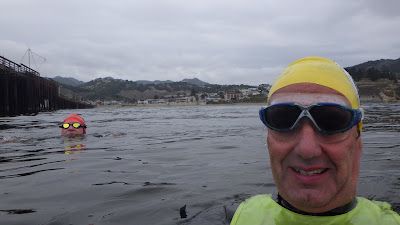 Duke and Niel at the end of the Avila Pier.
After we got out we saw Tom doing backstroke on the east side of the pier. I don't know where the rest of his swim was.
Duke will swim at 8 on Thursday. Leslie, David and I will be there about 8:30. I'm coming even if it is raining.
niel