Winter At Avila Beach -
Super clear skies, light winds, no crowds, a clean ocean with no red tide and great visibility in the cold water. 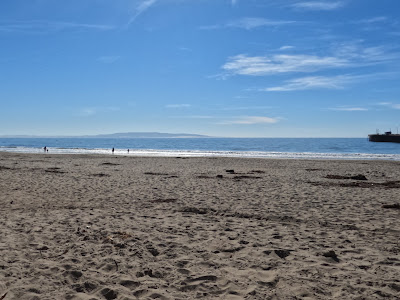 Tom was getting out when I arrived. I spoke with him as he was getting out. He thought the conditions were the same as yesterday.
The air temperature was in the upper 60's, the water was 52° (my thermometer said 53°+ but Tom, David and I say 52°) and there was the same short period swell out of the SW that was pushy but not bothersome. It didn't look like much from shore but it grave the water a nice character.
David and I went out to the end of the Avila Pier and did four crossings between the Avila and Cal Poly Piers. We swam to the second crossbars, to a spot on the Avila Pier directly across from us, to the third crossbars and back to the end of the Avila Pier. It turned out to be a nice distance. 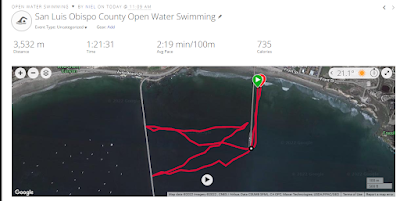 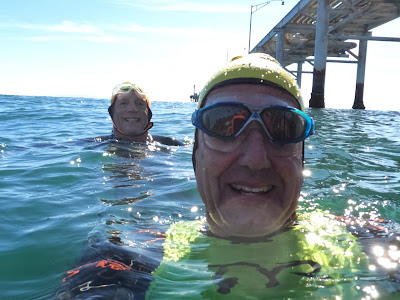 David and Niel at the third crossbars on the CPP.
I expect to be back Tuesday morning at 8.
niel