I have not been swimming at our usual time on Sundays in order to avoid the crowds but I decided to give our traditional start time of 11 o'clock a try today. I enjoy swimming at 11 which allows me to have lunch on the beach afterwards and see some friends.

Chad, Brittany (who would swim) and their son Avery arrived shortly after I did and then Tim also arrived. The three of us planned to swim out to the end of the pier, do a triangle and come back in along the pier for something a little over a mile. Teresa joined us at the end of the Avila Pier.
On Thursday the water had been unusually warm, 58 to 60 degrees. On Saturday the wind had picked up and the water temperature had gone down to about 58, which was still very comfortable. I had planned for today's conditions to be the same but the wind had a different idea. It turned offshore Saturday night and by 11AM on Sunday the water temperature was about 53 - 54. That was bad for me because I had decided that with water in the upper 50's I could wear my tri suit. I had also decided to grab the older, leaky suit rather than the new one. I'm not sure what I thought that I was saving the new one for but I was cold during the entire swim. There was enough cold water moving around in the suit that I was wondering if the zipper had failed. So I pushed for the entire swim, never got comfortable, and tried not to think of that toasty Patagonia R3 that was hanging in the garage.

The wind had pushed up a good head slapper of a chop that was at its worst on the legs from and then back to the end of the Avila Pier. 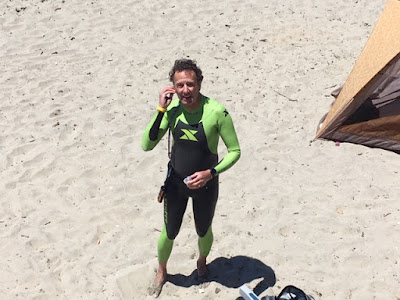 Niel after getting out. Photo by Leslie. 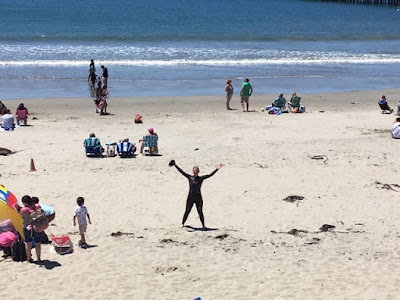 I spoke to Leslie, she Tom and a some others had gotten in at 9:30. Her report:

We jumped in at 930. Went to the creek mouth and then thru the pier to fossil point. Back along the buoy line to the 4th buoy by the creek again then out around the Avila pier and then in.  So cold!!  My hands and feet were purple and numb and the reason I was sitting there was to warm up because I literally could not feel my feet when I was walking on them and I felt very shaky.  So... I got some Jelly beans for a fast sugar kick and hung out until my brain recognized my lower extremities again.

Then I saw John and Amy snd my day was complete!
John Hampsey and Amy also got in at about 11 but we didn't see each other in the water. I did get to visit with John for a while after we got out. I don't think I had spoken to him in 4 to 6 weeks.