Tom, Niel and Hillary swam around Avila Rock this morning, we were in the water at 9:30. The wind had begun early and there already was a strong current and 1 to 2 foot chop coming out of the SW or from the lower left hand corner of the plot of our route.

We got to experience the conditions three different ways, over the right shoulder on the way to the rock, over the left shoulder on the way back and straight into a diminished chop but strong current for the last leg back along the buoy line.
Tom and Niel thought that the swim from the rock back to the 4th buoy was the toughest. hillary opted for the leg along the buoy line. 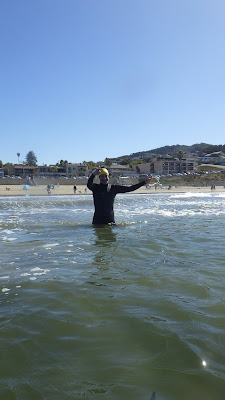 Tom getting in. Avila Rock is that way. 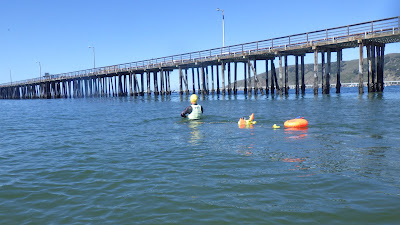 Hillary and her flotilla getting in.  The ducky is a child's bathtub thermometer which read 59 degrees today, but the feathers make it read warmer. We agreed on 57. 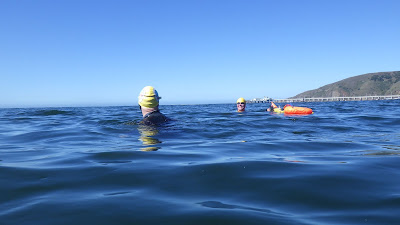 Tom and Hillary at the end of the Avila Pier. 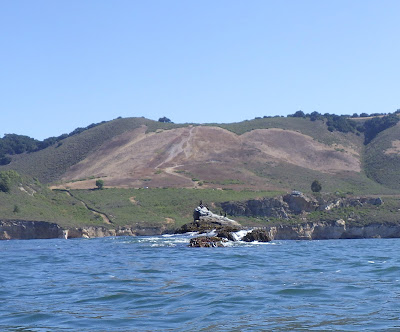 This is a view of Avila Rock looking north. There are kelp beds around the rock that flatten out the ocean's surface, but once we cleared them heading back it was back into the washing machine. . 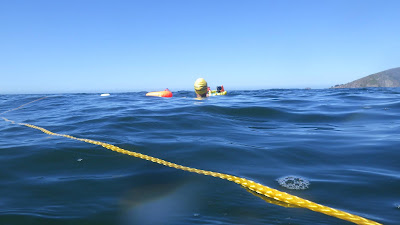 Hillalry at the rock. The yellow line is my tow rope for my water bottle, the white floaty thing near Hillary's flotilla.
Yes the line if much longer than necessary. I've never bothered to shorten it. 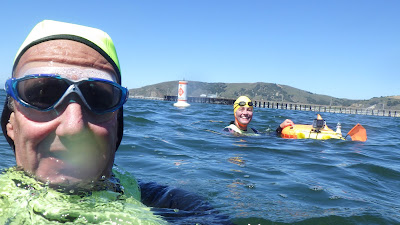 Niel and Hillary glad to be back at the 4th buoy and heading to the finish.

If you look carefully at the plot you can see the directly western line Hillary and I took after we rounded the rock and cleared the kelp. We were thinking that we would return to the end of the Avila Pier but were getting so beat up swimming directly into the current and chop that we altered course and headed for the buoy line. The chop was about 2 foot and I thought that swimming into it was like running uphill and getting hit on the head with a Wiffle bat every 2 seconds.

Tom and Niel are going to swim tomorrow morning at 9:30.