Hillary, Niel, Tom and Teresa swam today at 9:30. Tom suggested that we do the same route as last Thursday, but in to opposite direction, just to see if it came out the same distance.  So, for the lack of a more inspired plan, that is what we did.  However, conditions were very different than on Thursday. Two days ago we had calm flat and warm water conditions. Today the water temperature was a couple of degrees colder and the wind started before we got in and was predicted to be 30 kts/hr this afternoon.  We swam an additional 56M today which seems pretty close to the 3404M on Thursday, especially considering all of the course corrections that today's conditions required. 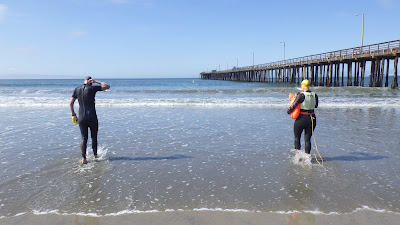 Tom and Hillary getting in. 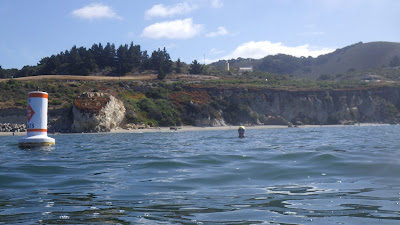 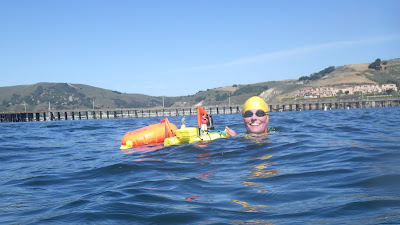 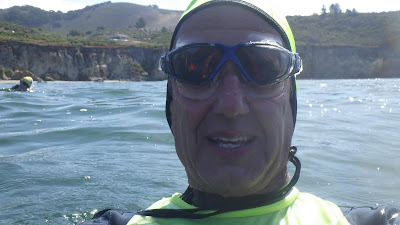 Niel at the 4th buoy. 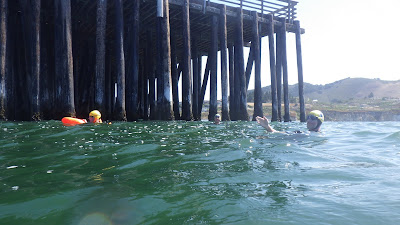 Hillary, Teresa and Tom at the end of the Avila Pier.
Tom is reminding us where the second crossbars onteh Cal Poly Pier are.
I was starting to feel a bit bumpy. 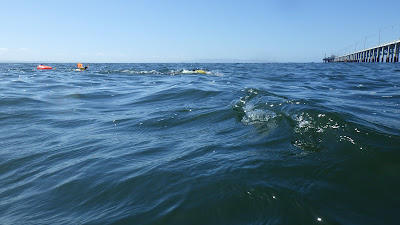 Hillary pulling up to the Cal Poly Pier. Getting here swimming into this chop was a bit of work.Oddly, the current and chop were comming from the area near Port San Luis, 2 miles due west instead of out of the SW near the end of the breakwater. Our next spot along the course is the end of the CP Pier about 650M into the background.
Tom and Teresa, being much faster swimmers, we swimming together and were probably halfway to the end of the CP Pier by now. 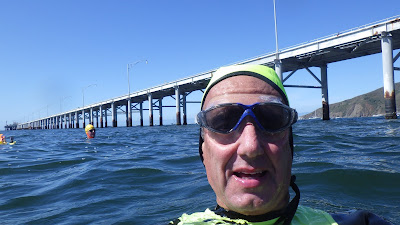 Hillary and Niel at the second cross bars along the Cal Poly Pier. 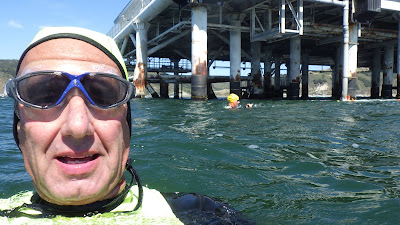 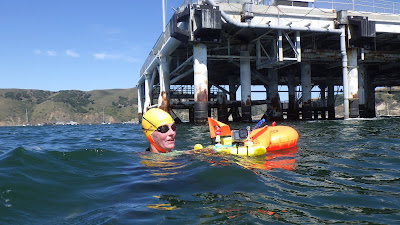 Hillary and the Avila Dolphin GoPro Party Boat. Besides the camera there are two Caution Swimmer flags and a shark and flamingo hula dancers.
The orange donut is a Zone 3 Swim Safety Buoy/Hydration Station. It has a bladder inside which can be filled with water or energy drink and a bite tube flex straw and a pouch on top for a water bottle or... 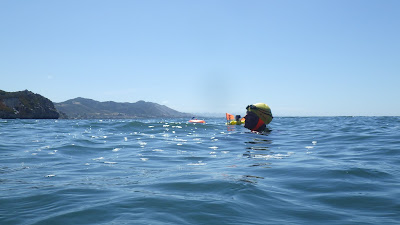 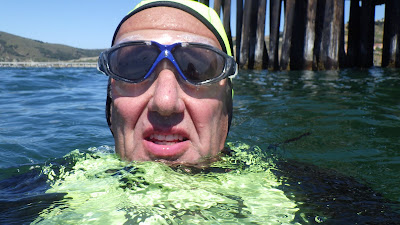 Niel back at the Avila Pier.


805 webcams has 20 webcam locations throughout the county with most at ocean or lake locations. The one at Avila is nice. It is motorized and transitions between 6 views. You can check out all of their camera locations at https://805webcams.com/

I'm going to swim at 11 tomorrow and spend some time relaxing on the beach after the swim.