There was a 600 acre brush fire near Avila in Shell Beach that began yesterday evening and had closed northbound 101 but it was knocked down enough this morning that we could get to Avila Beach without a problem. I couldn't see any smoke of other signs of the fire from the beach.
Teresa, Niel, Hillary and Tom swam at 9 AM. Conditions were pretty flat with a bit of a swell coming from the SW. We did a simple two laps around the big triangle, reversing direction after the first to give the route more variation. The chill in my hands and the brain freeze I was feeling while swimming out along the pier put my personal water temperature thermometer at 53 degrees. We all had a nice swim. Teresa did an extra lap of the east buoy line and Hillary got out after one lap. She has spent too much time throwing a ball over the weekend and her shoulder was being grumpy. 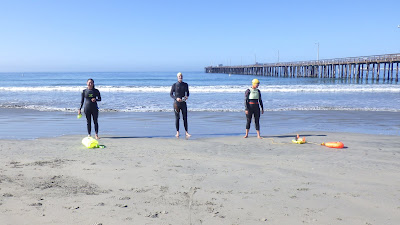 Teresa, Tom and Hillary.
Why is Tom the only one without a pull toy?

Unplanned Equipment Upgrade - The above was the last of the pictures for a bit because I killed my camera today. After the last picture download I had not secured the door over the USB ports properly and I now know what a Ricoh waterproof camera looks like after it has been filled with salt water. I put the camera in the warming drawer of our oven to see if I could dry it out, which it did, but the effect of the salt water was terminal. I didn't think of immersing it in clean water before drying it out. I don't think it would have saved the camera.
I did find the newest model on line for $100 less than I had paid for this one so I'm upgrading. 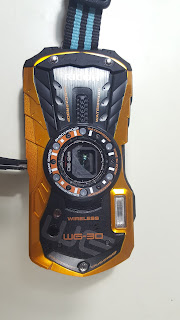 The 'film' on the inside of the lense is salt scum. 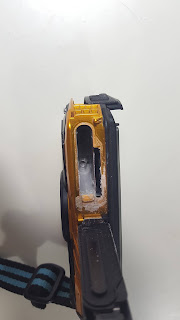 Dried salt in the battery compartment and memory card slot.