After yesterday's swim Tom and I were looking for a nice relaxing route that would let us relax and stretch the kinks out. Leslie was with us and would go a bit farther as she had missed yesterday's swim. I could just feel the wind picking up but it was not to the level it was at this time yesterday, the water looked nice and flat. Tom suggested that we go to the end of the Avila Pier, over to the second crossbars at the CP Pier, swim along the pier to the third crossbars and come back to the Avila Pier. 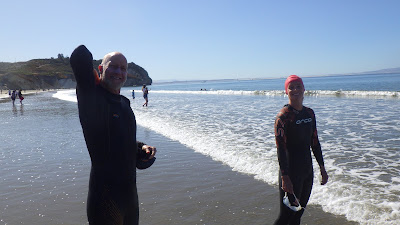 Tom and Leslie getting in. The water was colder than yesterday at about 55 to 57 in spots. 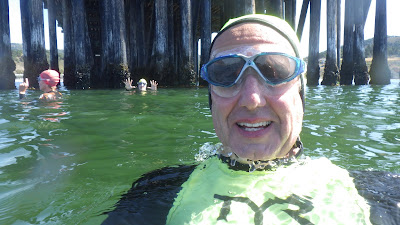 Leslie, Tom and Niel at the end of the Avila Pier.
I cannot explain what we are doing. 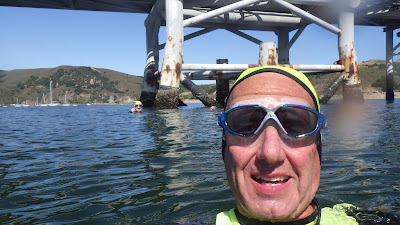 Over at the second set of crossbars on the CP Pier.
Tom, a peek at Leslie and Niel.
To swim to the third crossbars we crossed under the pier and swam along the west side just to have a different view than usual.
Leslie finished with a lap of the east side of the buoy line making her swim closer to two miles.