Grace, Theresa and Leslie did a weird route because of the large surf. The surf was super high and it looked like we were swimming in rolling hills. We went to the end of the pier, to the creek buoy, and back to the first buoy. Back around the pier to the 4th buoy on Fossil Point then back to the first buoy and out and back around the pier. A three pier swim I guess. It was crazy out there today but clear and not too cold.

I'm headed into SLO now for a tetanus shot. 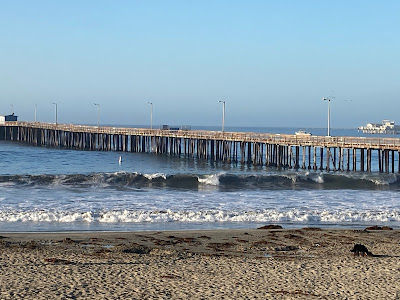 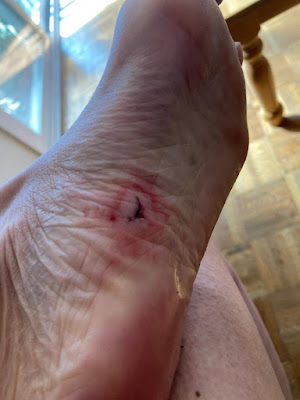 Leslie says that she stepped on a piece of glass up near our chairs but she is too modest. I think that that looks like a puncture wound from a white sharks triangular tooth. I think that she fought off the big predator with her teeth and nails and doesn't want to worry the rest of us.

Hi Niel,
I emailed the email you have above! Would love to swim with you guys when I visit Next week!!! My email is swimcatalina44@gmail.com!
I just had baby boy number 4 so I’ve slowed down a bit just wanna get in for sanity ❤️

Hi! I also emailed about potentially swimming with you guys! I am a college swimmer living in the area for the semester and looking to get into some open water swims. Let me know if that would be possible and how I can get in touch! Thanks! -Kate

Hi Kate will you be there next week? We could meet and swim together!?

We meet on the beach near the concrete stairs in front of the restaurant The Customs House. Up against the seawall. Going today 10/1 at 9AM, most likely friday 9am and all weekend around 9 or 930. Meet up on the beach. you should see people with swim bags! Hope to see you. I think Niel is out of town so I thought Id reply to you both Leslie

So fun swimming with you guys!’thanks for the warm welcome! Niel hope to catch you next month!!
Amy