Thick, low clouds but no fog made for fine swimming conditions today. The water was glassy and clear, there was no wind, nor birds or bait balls and no shark warnings. The water temperature was 58.5°F but felt like about 56 at the start and was comfortable after the first quarter mile. Niel, Hillary and Theresa decided to got out and left along the buoys, to the end of the Avila Pier and to then decide what looked interesting.  At the end of the Avila Pier we decided to go to the third set of cross bracing on the CP Pier. Once there we decided to swim to the end of that pier and from there liked the idea of swimming back along the length of the CP Pier to the second set of cross bracing and from there to the west buoy line and home. 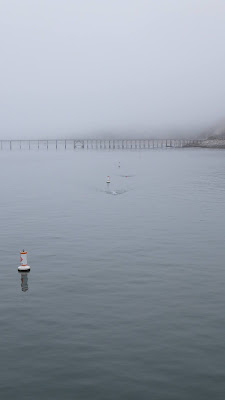 A couple of other early morning swimmers at the west buoy line.
You couldn't see the hills but navigation was not going to be a problem 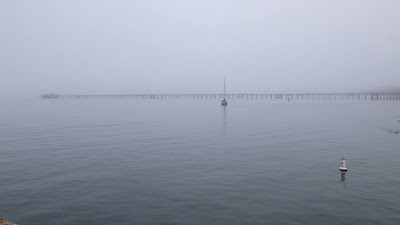 The Cal Poly Pier.
You can just make out the three sets of cross bracing that we use as navigation points.
We never swim to the first set on the far right that is closest to
the shore as it is rocky and kelpy over there.

I don't recall ever swimming this exact route before. It has some nice long legs:
1,000M from the 4th buoy to the third cross bracing on the CP Pier.
Another 400M to the end of the pier.
700M back along the pier to the second set of cross bracing and
650M from there to the Avila Pier.
I got so lost in my head thinking about my stroke that I ran into another buoy. 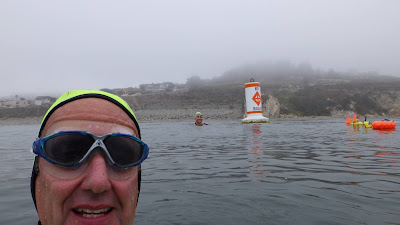 Niel, Theresa and Hillary's foltila at the 4th buoy.
The flotilla is a raft made from a yellow water noodle that holds her GoPro,
two flags and a shark and flamingo hula dancers,
an orange bladder with water and a yellow ducky bathtub toy
that has a thermometer in its tummy. 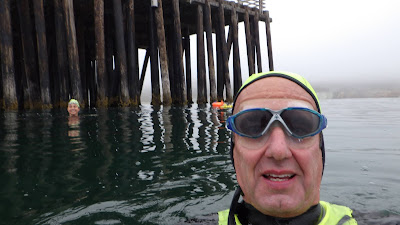 Theresa, Hillary's flotilla and Niel at the end of the Avila Pier. 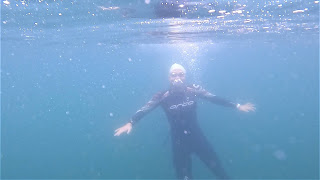 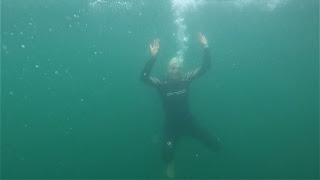 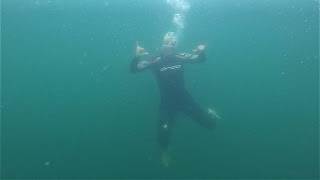 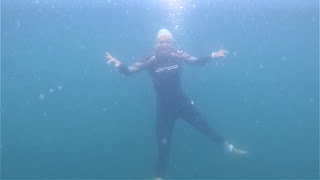 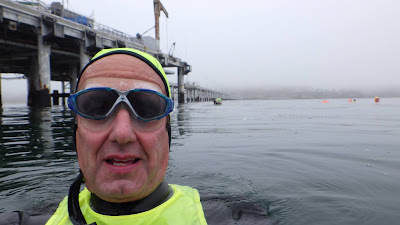 At the end of the CP Pier 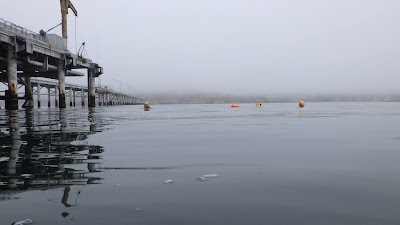 Theresa and Hillary.
When we got back to the Avila Pier Hillary and Niel came in while Theresa adid a lap around the pier.
I'll be swimming on Thursday morning at 9.
niel
Posted by Niel at 2:18 PM