Tom, Teresa, Hillary, Niel, Cyril and Dave got in at 9:30 under sunny but breezy skies. A good wind chop was already on the water and looked to build up to whitecaps late in the morning. The water temperature was still cold, possibly colder than yesterday, on the east side of the pier but several degrees warmer on the west side and over towards the Cal Poly Pier. The route was to swim to the end of the Avila Pier, to the 4th buoy on the east side, to the 4th buoy on the west side, to the 2nd crossbars on the CP Pier, to the end of the pier,  back to the end of the Avila Pier and in. This route is 2 1/3 milles. Tom lead Cyril, David and Teresa on a variation. Hillary and Niel met up with Tom, Dave and Cyril at the second crossbeams where David decided to continue with Hillary and Niel to the end of the pier. 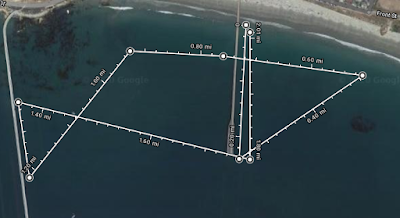 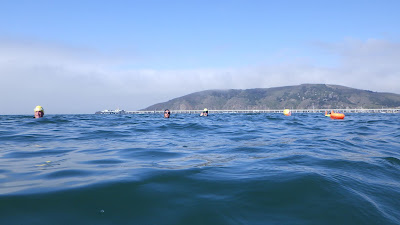 Dave, Cyril, Tom and Hillary at the end of the Avila Pier for the first time. 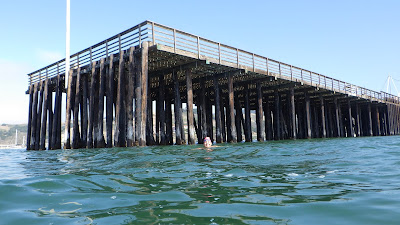 Teresa at the same spot and time. 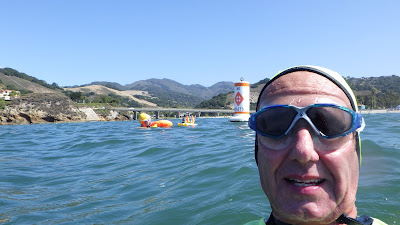 Hillary and Niel at the 4th buoy on the west. It was getting kind'a bumpy. 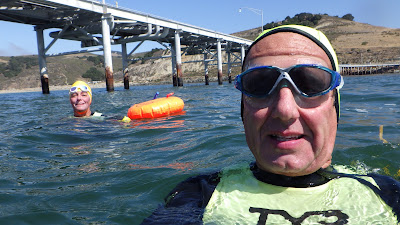 Hillary and Niel at CP Pier second crossbeams.
The swim from the 4th buoy to this point had the roughest conditions. 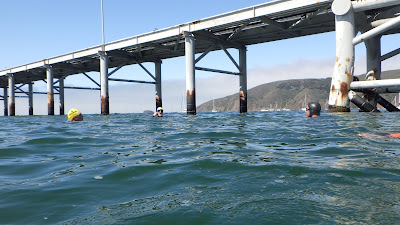 David, Tom and Cyril meet up at cross beam #2 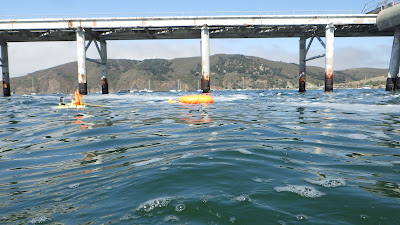 Swimming along the pier wasn't bad because the pilings flatten out the chop.
About 150M short of the end of the CP Pier we encountered a large patch of foam. It didn't smell or taste funny but the water temperature under the foam was extremely warm.
Could this have been a patch of whale pee? 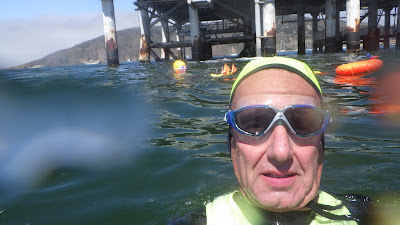 Hillary and Niel at the end of the CP Pier. 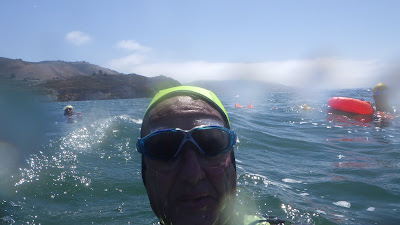 Hillary and Niel back at the end of the Avila Pier. The leg to here was the roughest but we had the current and chop following from our right rear so the swimming was nice.

This was a really nice swim today. Having the sun out was a bonus, even if it meant that the wind had gotten up early.

We will be avoiding the crowds at the beach and not swimming this Saturday or Sunday. The next swim will be Tuesday morning at 9. 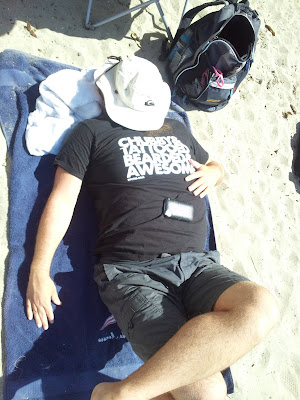 Ocean swimmer, friend, the only person to have done the Avila to Pismo 10k swim on January 1st in 51 degree water and all around great and funny guy, Rob Dumouchel, has accepted the job of City Manager for the City of Homer Alaska. This is the culmination of his educational and professional efforts over the last 7 years and he deserves a huge ATT'A BOY!  He hopes to be in his new position by the end of August and is not planning on returning to the Central Coast before starting his new job, so wish him well and many great adventures.