Avila gave us spitty fog, lots of gray and cool temperatures this morning. The water temperature was 57-58, the old, wet and sunless conditions always make the water feel colder than on a sunny day.  The upside was that it was totally flat and lwindless. The water has turned a red brown color and there are pelicans diving for fish, all signs of summer.
It was Tom, Hillary and Niel today with plans to do for about two miles.

Our route took us down the buoy line, over to the third crossbars, thena rair adventure over to the west side of the Cal Poly Pier to round a blue hulled sailboat before going to the second crossbars and to the end of the Avila Pier. Tom didn't have Teresa along today to pull him off the front and keep him warm so he had gotten cold waiting for Niel and Hillary at the stops, so he headed in along the pier while Niel and Hillary went to the 4th buoy on the east side and back to the start. 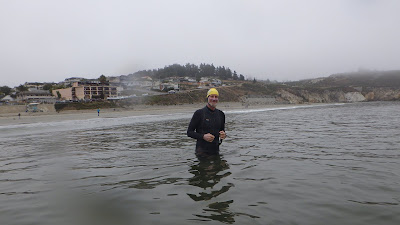 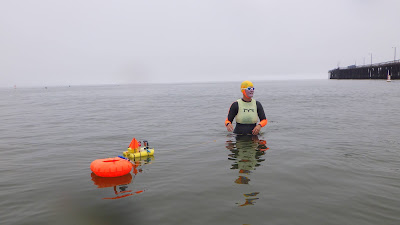 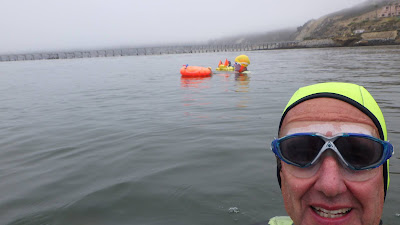 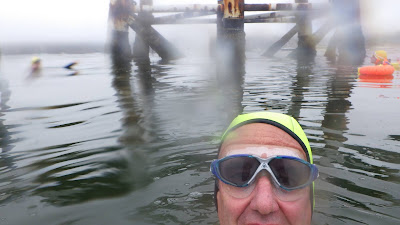 Art or just forgetting to wipe off the camera lense?
Tom, Niel and Hillary at the second crossbars. 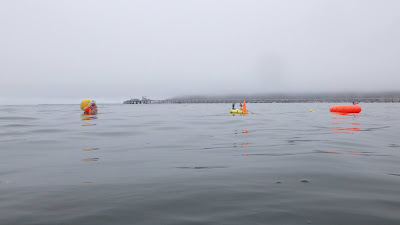 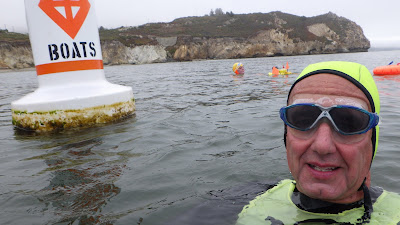 Hillary and Niel at the 4th buoy on the east side.

Our next swim will be on Saturday morning at 9:30.