We had a nice change in the weather today, the sun came out just as we began swimming. The fog moved off because the wind picked up earlier than it has been so today was also the end of our glassy surface conditions. The water temperature was 14.5°C/58°F. Swimming were Brittany and Niel and I met Kim in the surfline as I was getting out. She will be joining us this coming week. Brittany and I agreed to do the triangle counterclockwise, once for her and twice for me. With the wind and chop coming up not going clockwise was a good choice as doing this route clockwise puts the longest legs into the wind and chop, and neither of us felt like doing the additional work. 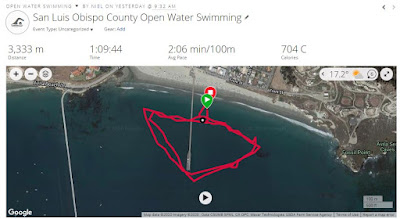 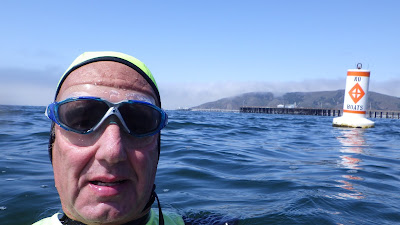 Me on the second lap at the 4th buoy on the east side of the Avila Pier. From here I needed to swim down the buoy line to the first buoy at the pier, round the buoy and swim to the beach.
Do I look tired to you? I hope so because I pulled off a personal first and I'm looking for a excuse. I managed to hit the first buoy with my head. I've grazed them with my hand before this but never made a direct hit. I spotted the buoy from about 20M and angled to pass it on the left, swing around it and head to the beach. I'm saying that the current pushed me into it.

Our next swim will be Tuesday morning at 9:00.

Thank you Jef Mallett for seeing the humor in the triathlon brain.