Sunday at Avila was sunny with a light breeze, a comfortable temperature on the beach and a water temperature of 15.5°C/60°F, all looked good for a nice swim. Tom and I were looking for something shorter than our usual distance and Dave and Teresa were interested in doing a bit more so we planned a route over to the CP Pier that would work for all of us. 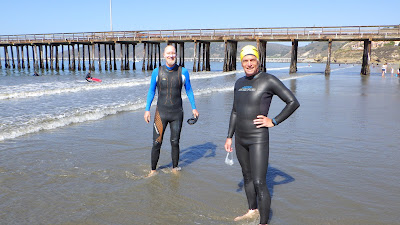 Tom and David
This photo was taken looking west towards the Avila Pier.
The long white line on the water's surface in the
background is our destination, the Cal Poly Pier. 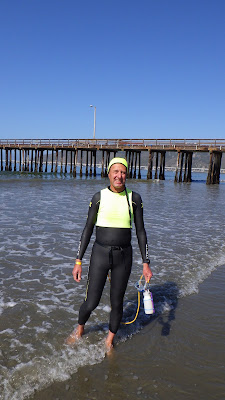 Tom and Niel did 1.6 miles.
Teresa and Dave added a finishing lap along the buoy line for an additional half mile. 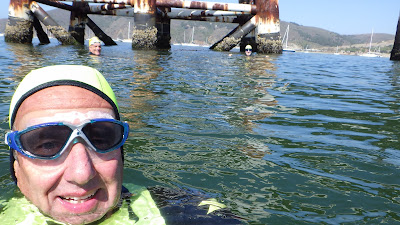 Niel, David and Tom at the third crossbars on the CP Pier. 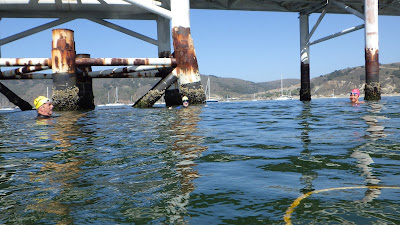 David, Tom and Teresa at the third crossbars.
Teresa had gotten in a bit after us and caught up to the group here. 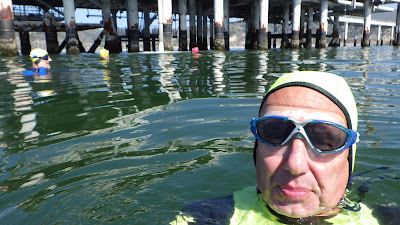 Tom, David, Teresa and Niel at the end of the CP Pier 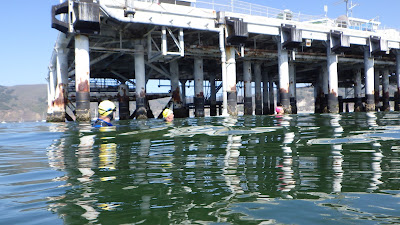 Tom, David and Teresa.
The end of the CP Pier is a favorite destination for me. The end of this pier is 876M offshore, more than twice the distance Avila Rock is off of Fossil Point, and it feels like you are on the edge of the open ocean. The pier makes swimming out here more sheltered from chop and watercraft than a more open destination like the Avila Rock.
This pier and the previous wooden pier were built by Unocal to support the transportation of petroleum products by tanker and pipeline to and from the Central Coast and production facilities in the central valley.

The next swim will be Tuesday morning at 9.