We had six swimmers in today's group; Teresa, Tom, Leslie, Niel, Hillary and Stefanie.
There were the same gray overcast skies, a pronounced swell but not much surf, chop blowing in from the SW and a water temperature of about 56, about one degree colder than Tuesday.

We swam two short legs, first to the 4th buoy and the second to off of Fossil Point. Then three long legs, to the end of the Avila Pier, to the third crossbars on the Cal Poly Pier and to the 4th buoy near the creek mouth and finally a short leg along the buoy line to our starting point.
Tom, Leslie and Teresa went off the front when we left Fossil Point. They swam to the end of the Avila Pier and swam this route: 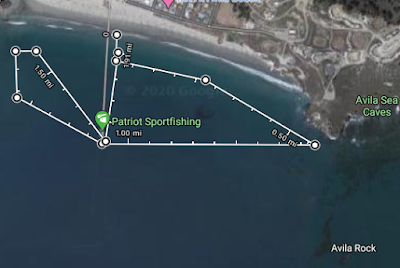 The conditions got a lot rougher towards Fossil Point and Stefanie decided to do her swim along the buoy line.
Hillary and I banged our way from Fossil Point to the end of the Avila Pier, a swim that was a lot of work but not much misery. It was flatter over towards the Cal Poly Pier and quite smooth once we got close to the beach. 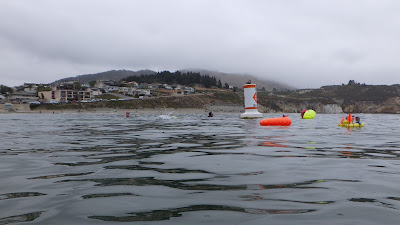 Getting formed up to start at the first buoy.
Leslie, Tom (swimming), Stefanie, Teresa and Hillary. 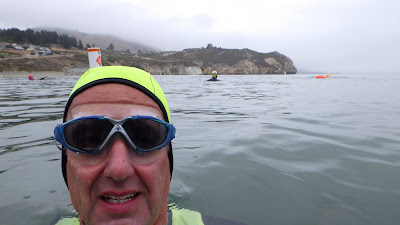 Leslie pointing to the Point, me, Tom and Hillary 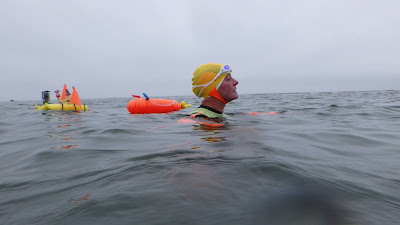 Hillary at Fossil Point looking for Tom, Leslie and Teresa.
Teresa's green buoy really stands out on the water. 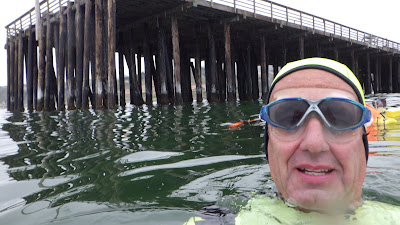 NIel and a bit of Hillary's gear at the end of the Avila Pier. 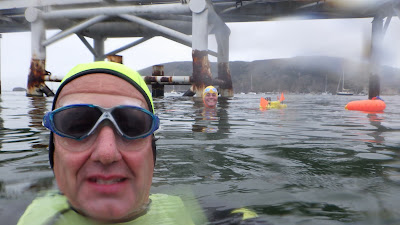 Niel and Hillary at the Cal Poly Pier 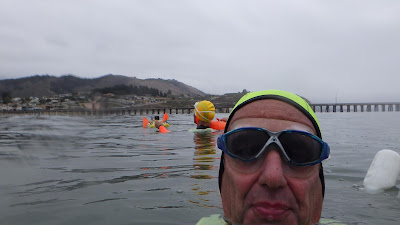 Hillary and Niel at the 4th buoy near the creek.
Done and ready to finish and get out.

We are going to swim tomorrow morning at 9:30 and skip swimming on Saturday and Sunday to miss the crowds.