Back To Normal -
By 10:30 today the only sign of yesterday's tsunami was the debris on the beach and that the sand was wet all of the way up to the sea wall. The water looked nice and clean. I spoke to Tom as he was getting out and he said that the swimming conditions were wonderful. There were high clouds, no sun, no wind and the air temperature was 59°. The pier was still closed but the toe test and brain freeze estimate of the water temperature was 53° to 54°. There were occasional 3 to 4 foot sets and a big long swell outside, but a pretty smooth surface for swimming. 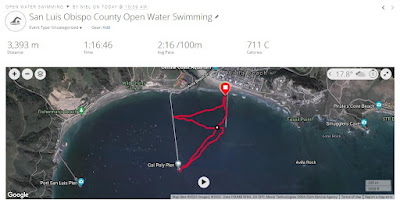 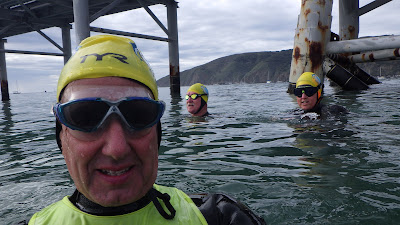 Niel, Duke and Jodi at the second crossbars on the CP Pier.
I'm swimming next at 8 on Tuesday, Duke is a maybe.
niel