X Marks The Spot
We never knew when we were where our paths crossed but the X worked out pretty well. Jodi, Duke, David, Tiki and Niel started out with the 1000M leg from the beach to the end of the Cal Poly Pier, swam in along the pier, over to the end of the Avila Pier and in to the beach.
Avila Beach was so nice that I stayed extra long and I still had a hard time being responsible and leaving. A clear, cloudless, windless 70° day on the beach with January 'crowds'.
The water was 55°, clear and almost flat. The surf was just something to wade out through. We got in at 11 and swam for an hour.
It was so nice having it warm and calm after the swim and then a nice warm wall to sit next to, start having thoughts about taking a nap and not being able to think of a better place to be.
Heidi and Maria were in early and encountered Tom McNeil on a paddle board near the end of the Avila Pier. Tom swam with us many years ago.
Tom Lorish and Sue were getting out as I arrived at 10:30. 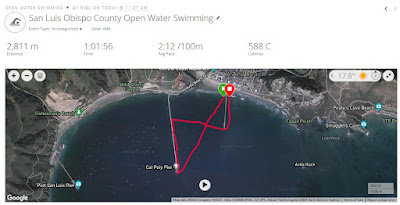 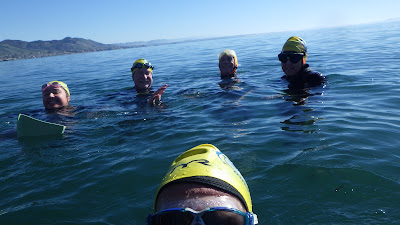 Tiki, Duke, David and Jodi with head by Niel
Posted by Niel at 5:40 PM