A busy morning for the Dolphins; Stephanie got in first and swam by herself. Her report was "rough, bouncy, got tumbled", next were Tom and Sue who found similar conditions and swam about 3000M. Last was Niel and Duke at 11. The air temp was 58°, the water 55° and sets of 6+ foot breakers which pushed the king high tide way up the beach. 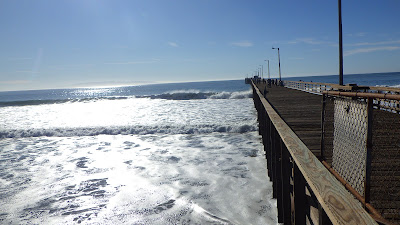 The swells looked smaller and less consolidated on the right side of the pier so we got in on that side and did Duke's U-Burner route. Short but very physical. My plot looks screwy, we got out at the last set of stairs near the start of the seawall, much further to the right than the plot shows. I didn't take my camera because I did not want to risk beating it up or losing it in the surf. 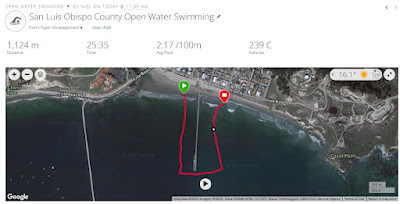 It was nice getting out when it was warm and sunny and seeing Peter Kelley up on Front Street.
Duke and I will swim at 8:30 on Thursday.
niel