Back In The Water -
It has been just 6 days since the beach closed, first for sharks and then for sharks and bacteria, but it felt like I'd been gone for a while this morning. Plus the weather conditions at Avila Beach were weird. At 7AM Avila looked like January with a storm moving in with gray clouds down the the horizon and a steady wind out of the SE that made a foot high wind chop that put a very messy surface on the water. The air temperature was 57° and the water temp was still up at 60°- 61°. 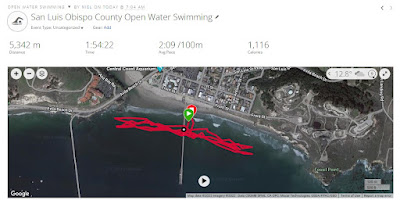 I was going to ease myself into things and just swim parallel to the shore between the buoys and the break for about 3200M. It was rough going out and became harder when I turned left and had the chop on my right shoulder.  Working my way down to the end of the buoys I was wondering how long this would remain fun. The return to the mouth of the creek was much easier and so was my second time going east. I was thinking that I was getting my swimming chops back but actually the wind was dropping and the chop flattening out. Sure enough I didn't get much of a ride on my second lap west. With the swimming getting easier I decided to do a third lap to the east and when I got back to the pier I figured why not just go on down to the creek a third time. It is funny how these things work, I wound up doing an extra 2000M without ever thinking that I was going much more than my planned 3200M. 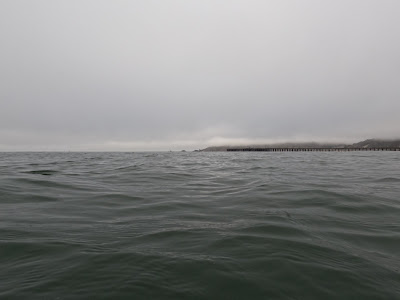 Looking back towards the Avila Pier and the port from near the reef buoy on my second lap. The water was already just lumpy instead of choppy.
When I was back on Front St. I saw Tom and handed off the swimming baton to him. We will probably see each other tomorrow.
I'll be getting in at 11.
niel
Posted by Niel at 2:18 PM