Todays swimmers were Jodi, Stephanie, Niel, Tom I., Theresa and Grace. We spoke with Tom L. at the the end of the Avila Pier near the end of our swim.

It sunny with a light wind and 46°. The water was 50° and still very clear. I plotted a route that would take us at about 2,500M at the second crossbars on the CP Pier, giving us optional routes to add as much distance as we wanted. Returning to the end of that Avila Pier and retracing our route out put us at 4,008M. 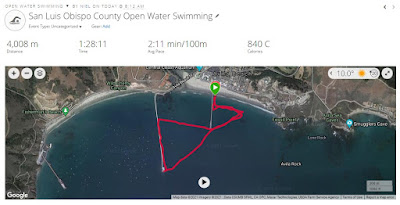 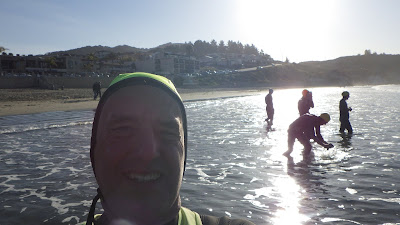 Getting in. That is me, Theresa, I think, Tom washing out his goggles, Jodi behind him and Stephanie on the right. 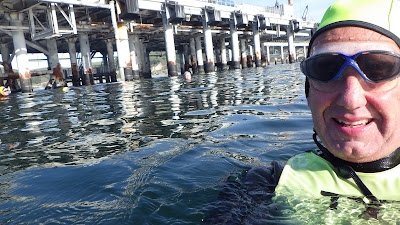 At the end of the CP Pier. Jodi, Tom with his head in the water, Grace and Niel 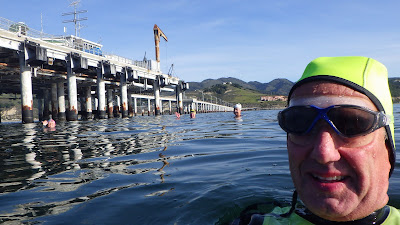 The rest of the group; Grace, Stephanie and Theresa
People were getting cold at the end after 1:28 in 50° water. I'd could stay in longer (I wear a 3.5/4.5 surf suit) but would need to bring some calories along.
We'll swim tomorrow at 7:30.
Avila Beach is starting to get crowded like summer. Popups and families on the beach, groups of students and about 25% of the people wearing masks, so plan your visit accordingly.
niel