An Adventure Swim In The Fog 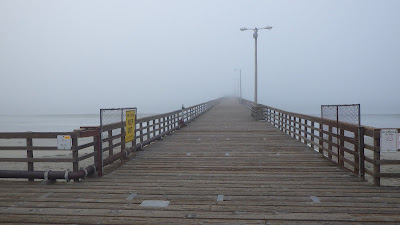 This morning Avila Beach was full of thick fog. I could barely see any of the swim zone buoys from the beach. From the pier I could see only the first buoy on the lefts side but I could see the second buoy on the right side. The air temperature was 47° and the water was 50°. The surf was 2 to 3 foot and there was a slight offshore breeze. The water had cleared up and there was no trace of that ugly red brown tint it had earlier in the week. 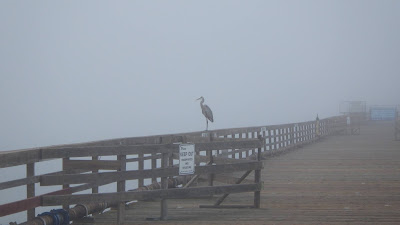 This Blue Heron was using the Avila Pier to check the surf line for breakfast opportunities. I tried to glide by him on the right side of the pier but he didn't like it and made sure that I knew it when he took off. 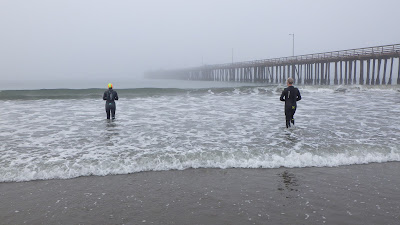 Up for an adventure swim today were Jodi, Duke and Niel. The plan was to swim out along the Avila Pier, around the end, back to the first swim zone buoy on the opposite side and along the buoys to the fourth one at the creek. We couldn't get lost with the peir and the buoys to follow. We'd make a further plan based on what we could see from the fourth buoy.
From the forth buoy the shore side half of the Cal Poly Pier was in bright sunshine so I proposed that we swim to the second crossbars, out and back along the pier and then back to the Avila Pier. That worked pretty well. Duke kept the pier on his left shoulder, Jodi swam out and back on the east side and I swam out on the east side and came back under the pier between the pilings. 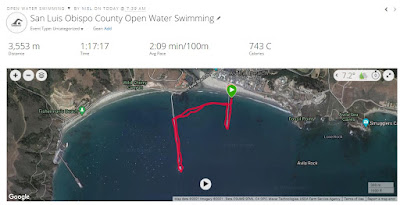 Back at the second crossbars we could not see anything of the Avila Pier, but the sun was shining through the fog so I lined up pointing to where I thought the shore end of the Avila Pier would be and kept the sun in that position while I swam. I impressed myself by coming right up on the fourth swim zone buoy. I found Duke and Jodi half way along the buoys and we continued on in. Jodi and I felt warmer today than yesterday, which doesn't make any sense but is the way it works sometimes.
I plan on swimming Tuesday morning at 8, then I'll be out of town until Sunday. Sunday is a maybe for me so I'll post if I'll be there.
niel
Posted by Niel at 11:28 AM