Starting Sunday Off With A Cold One -

Possibly not what you were first thinking...... Avila Beach was gray with solid overcast this morning, a 45° air temperature and a 49° water temperature. The lack of sunshine would make today's swim a chilly one.
Duke, Jodi and Niel were ready at 7:30 to get in. Stephanie came just as we were heading towards the sand so she would meet us at the end of the CP Pier. We had decided to do a zig-zag route between the Avila and Cal Poly Piers that would be a bit longer but the water temp changed our ideas about going that distance. There was no wind, surf that you could walk through and clear, glassy water.
It is surprising how much having the sun out effects how the water feels. We all remarked that it felt cold, colder than yesterday, as we were getting in. My toes hand hands were saying 47, maybe 48 degrees. Nobody wanted to idle around in the water so we got started and met up at the second crossbars on the CP Pier. 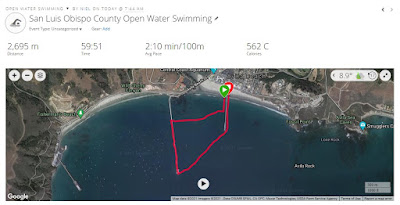 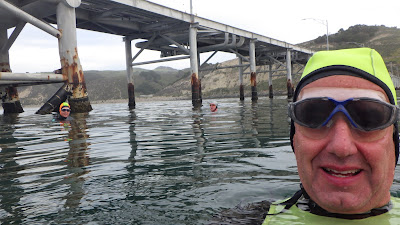 Jodi, Duke and Niel at the second cross bars along the Cal Poly Pier.
For the leg to the end of the CP Pier Jodi took the left (east) side, Duke swam on the right (west) side and I took the lane down the middle. 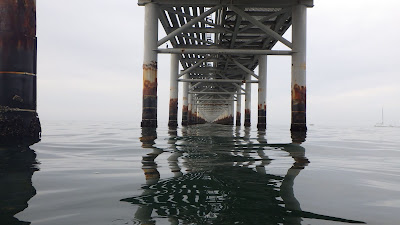 I had a lane 620M long, with just one jog around the third set of cross bars. 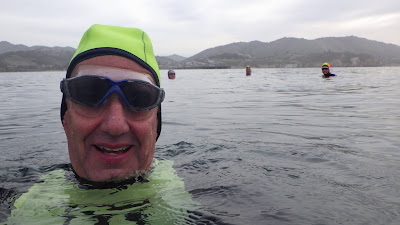 Niel, Duke, Stephanie and Jodi at the end of the Cal Poly Pier.
The end of the Avila Pier is between Duke and Stephanie.
I saw Tom Lorish getting in as I was walking back to my car after I had changed.
Duke and I are planning on swimming Tuesday morning at 8.  I'll swim Thursday at about 8:30. 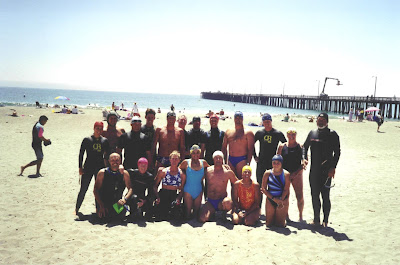 A bit of fun history. I first started swimming with the Avila Dolphins in 1992. I'd known Steve Snyder (5th from the left in the first row) for years and we regularly saw each other at the pool in San Luis Obispo. He had been swimming in the ocean for several years. He worked on me for a while and eventually got me down to the beach to try swimming in the ocean. The photo is the Avila Dolphins before getting in to swim on a Sunday morning between '92 and '95. We had two dozen people in the water that day. Duke and I are in the back row, 6th and 8th from the left.  Another 10 or 12 are still in that area but I don't see them at the beach anymore.
niel