At 8 this morning Avila was sunny and 40° with a very light wind, an occasional 3 foot wave and a pretty much flat 50.5° ocean.  Yes, colder than yesterday, but at least not back in the 40's.

This doesn't look like much but it is the best photo I was able to get of one of the large black dolphins that have been in the area the past few days.  It is always nice to see dolphins. They are fun to watch and they don't tolerate having sharks around. 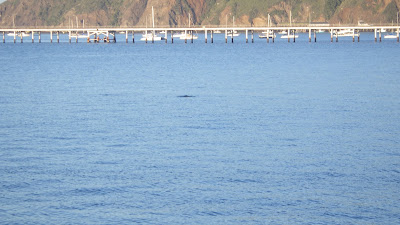 Duke had a plan for a swim that would get him to his 9AM phone call on time. We shortened his route and it worked OK. 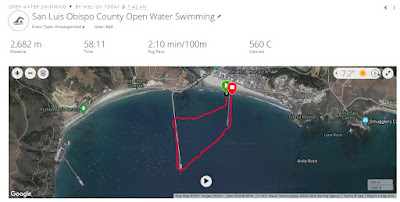 Out on the west side of the Avila Pier, over to the second crossbars on the Cal Poly Pier, to the end of the pier and back to the Avila Pier and in.
It turned out to be just under 2,700M and an hour. 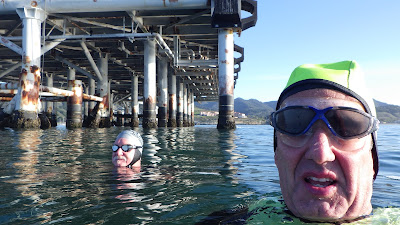 Duke and Niel at the end of the CP Pier.
Tom Lorish is swimming regularly now but needs to get in later in the morning. Leslie Tappins will be back as soon as her elbow is happy with that idea.
Duke and I will swim at 8 on Tuesday. I'll be getting in at about 8:45 on Thursday.
niel

Hi there! Visiting family in SLO and might join you one of these mornings -- I usually do about .5-1 mile in Alameda or Berkeley and am very slow but I love getting out there. Thanks for the detailed blog!