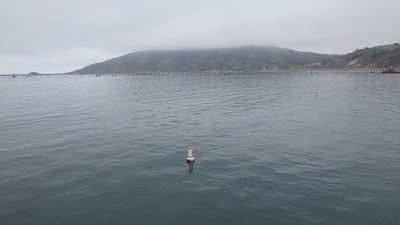 I don't know if this is low clouds or high fog, but we could see to swim and the surface conditions looked great. The air temperature was 51° and the water was UP to 52° and was exceptionally clear. It looked like a great morning to swim.
I had to go check my notes. On 11/8/20 the water temperature was 55°, which was typical for that time of the year and it would be expected to hang around 55° until spring winds would push the water temperature into the low 50's for a few weeks. Well, one week later on 11/15/20 the water was 49°, has it has not been above 52° since then, though it has dropped as low as 47°. That makes this the longest run of cold water I know of since starting to swim at Avila Beach in 1992.
Niel,. Sara and Duke were ready to swim. We decided to go down the buoy line and on to off of Fossil Point. Then to return along that route and do a lap of the swim zone buoys on the west side of the pier. 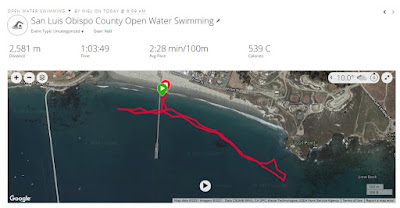 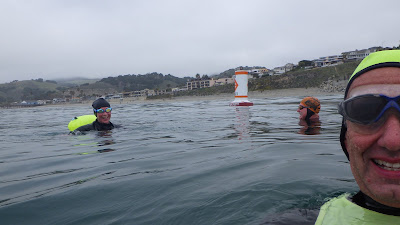 Sara, Duke and Niel at the last buoy on the east side before heading to Fossil Point.
Sara got out when we were back at the pier while Duke and I did the lap of the western buoys.
I saw Theresa and Grace wading in when I was at the showers.
I'm going to be out of town so I won't be swimming until this Sunday or maybe even next Tuesday.
niel

Hello, I contacted your group through the email listed on your website. I am a Triathlete from Bakersfield looking to find a group to get some ocean swimming practice with. Please feel free to contact me by e-mail sandlinjessica@aol.com